Vergilius Raskolnikov was an unassuming literature snob for many years, until his midlife crisis set in one second before half his skull was destroyed in a carwash accident. 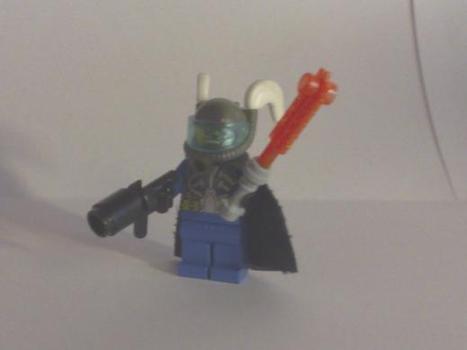 When Vergilius woke up at the surgery table, his life saved by a bionik implant, he was filled with delusions of grandeur. He vowed to conquer the universe or destroy it in the attempt. Many minifigs looking for a direction in life were inspired by Vergilius' energetic megalomania. Soon he had plenty of soldiers under his command. 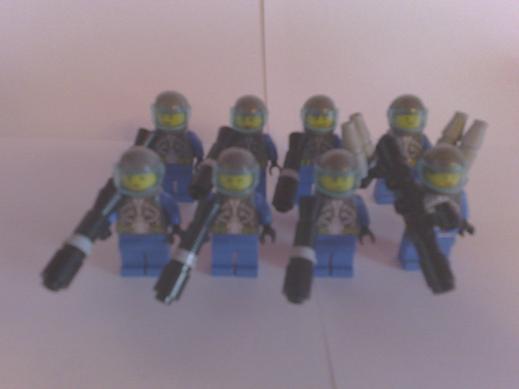 The power of Vergilius seemed unstoppable, and he conquered the major systems of Tomania, St. Helens and Kurtz in quick succession, as well as numerous less important worlds. His campaign against the Charybdian pirates ended in disaster, however, as Vergilius was killed when attacking a pirate party. Unfazed, his army withdrew and regrouped, confident that their leader would not let death stop him from completing his quest.

Vergilius Raskolnikov showed nothing but disdain for the horrors of the Hell he was sent to. He conquered part of it, then opened a way into the mortal world where he and some of his demons got out. The exit happened to take place on the world of Alighieri, a frozen world on the edge of FELC space. After butchering a few locals for good measure, Vergilius contacted his army. Within minutes a conquest fleet was headed for Alighieri.

The war was going and blowing things up, when suddenly those pirates appeared again. A simple fort assault turned into a chaotic bloodbath as more forces joined in, including an Immortal delegation sent to declare war on the FELC. In the end, Vergilius was killed again, before the whole damn planet was burnt to ashes.

Vergilius came back soon enough though, and led a new invasion force against the unclaimed worlds in strategic positions between his empire and the FELC. The FELC brought both their allies and their enemies, and carnage ensued. On Remarque, Vergilius was killed yet again, and the FELC stood victorious.

Some time later, one of Vergilius' ships picked up an encrypted signal broadcast from neutral A.N.U.S. space. Vergilius decided that this was a sign and set out in a expeditionary fleet to investigate. Unfortunately, the mission was intercepted by an A.N.U.S. diplomat-fleet... and soon after, the Immortals. It turned out that the signal had been sent by one of the Warhead splinters, and the "real" Warhead was on his way to face his splinter in single combat. Perhaps foolishly, Vergilius challenged the two Warheads to a drinking contest. After being decisively beaten, Vergilius and his flagship was sucked up by an Immortal black hole mine.

The Diplomat-Commodore of the A.N.U.S. forces (who escaped only by commandeering one of Vergilius' escorts) left a very unfavorable report to the A.N.U.S. council, and there were calls to exclude Vergilius Raskolnikov from the A.N.U.S. The USA eventually took matters into there own hands, stole an Amygdala-Disruptor cannon and attacked the core worlds of Vergilius' empire. Though many citizens found their amygdalas disrupted, the invasion force soon got trapped in a time anomaly.

Vergilius ran for Secretary-General of the A.N.U.S. and was supported by several other empires (for some reason). The election got postponed when the Third Alliance attacked and destroyed the A.N.U.S. headquarters, but Vergilius is still hopeful...