From BrikWars
(Redirected from Praetoria)
Jump to navigation Jump to search

Originating in the Omegalon dwarf galaxy. Praetoria is in itself a small empire, that benefits from having relative peace in their home galaxy. meaning they can be much better at causing violence within Nehellenium. Praetoria prides itself on being free, open, new age driven, cultured and civilised faction, but in reality is more oppressive than even the worst regimes, with everything controlled by a small number of completely unaccountable figures.

Praetoria is a mass consumer of material, culture and technology, but exports very little itself. Anything from Nehellenium is viewed with an inherent mysticism and is therefore highly sought after, whether that be new forms of art, sports, film, technology. Indeed Praetoria comes off less as a culture of explorers or warriors that M-Throne or the Immortals do, but instead as 'tourists'.

If it wasn't for their formidable Fleets, and stockpile of technology from time working with Dial'O'Death, it'd not be too hard to file the whole Empire under harmless.

In the early days of the empire, the Brittanian League took out on a mass colonisation effort, sending out a great many ships laden with colonists. One of these vessels was the HMS David Robert Jones, a converted freighter with some 1200 settlers aboard, escorted by two ships, the HMS Exodus & Inexorable. These were a mixed bunch, entrepreneurs and scientists bunked up with vagrants and paupers.

The journey was to take 6 months, and lead them into what would become Assyrian territory, but at the 4 month mark, out of nowhere, a message was received by a listening post, it was short, garbled and ominous

Brittania officially never found out what happened to those colonists, although conceal the truth to this day. In an attempt to colonise distant galaxies, they had located a wormhole large enough to allow the one way transit of a single ship to another galaxy. Pirates were hired to force the ship through the wormhole, removing any choice from the colonists. The original plan involved telemetry and communications being sent back through what would remain of the wormhole, however one of the escorts, the Inexorable, managed to make the transit as well, but this left the hole completely ravaged, and unable to let even communications pass.

By sheer luck, the colonists found not only a hospitable world to settle down on, naming it in honour of there homeworld, New Praetoria.

On there new world, the colonists found wondrous technology and weapons, decades ahead of the league. It didn't take long for them to have space flight, and later star flight. It was at this point they found this galaxy had many unindustrialised world ripe for the taking, the Leagues spirit in many of the colonists, they carved out an empire in generations. 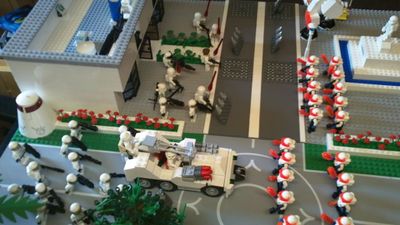 Omegalon is a Dwarf galaxy, but has a large section of uninhabited chaotic space, where travel is considered all but impossible. From this space, Praetoria's first real enemy appeared in the Xenkans, a warrior race with tech to rival Praetoria. These invasions weren't well weathered, but captured technology allowed for the development of advanced armour in use up to today.

It was these invasions that made Praetoria realise the dangers they needed to prepare for, as well as give them a taste for the harder conflicts.

With the onset of the Immortal Invasion, Praetoria pledged immediate support, in exchange for research assets. It was also at this time Praetoria met it's progenitor. While a lot of the details had become lost in history's static, there was at first joy with the possibility of a reunion, however the League wasn't so welcoming. Over the generations the same set of ideologies had been altered by these conditions, and the League had become old and stagnant while Praetoria went from strength to strength. During their time under the Immortals, several diplomatic tensions occurred, including the destruction of a Scythian Emperor battleship.

As an idea, the Allied Nations fit well with Praetoria's ideas, but in practice it was ineffectual. Praetoria pledged large amounts of assets to the AN, building it's fleets and PAX Corps. With the onset of the AN-TA war, the support for the group grew more, with whole Dreadnoughts provided to help the AN keep its power. This was all for nought as the TA blasted there way directly to planet New York, and took the planet by storm. With this crushing defeat, Praetoria went dark. All activity outside of there beach head ceased, and trading slowed to a trickle.

Then the eagle rose. One year later, a massive fleet of warships appeared at the Beach head, including the only Second-Generation supercapital, the HEMS Inexorable. This fleet cut directly to occupied New York, a place not visited by any AN friendly group since the rescue fleets lead by Jane Bolet.

Out of the woodwork, many groups sympathetic to the cause appeared, and the Second Battle of New York became a great victory, putting a nail in the TA's coffin.

Fighting alongside the Scythians, it became clear they were a more trust worthy group than the long absent Immortals. This went a long way to swing Praetoria to the Anti-Immortal camp, as any group that would fight for a cause because it was right, and not because it would bring them any gain, was a group worthy to be followed. And while Praetoria maintains no strong allies, it counts many as factions as 'worthy' allies.

Praetoria is counted among the most technologically advanced empires in the brikverse, due in part to its 'violent' technological acquisition programs, where there sophisticated technologies bring an insurmountable advantage to their forces. Most of these advancements were brought about by RARCom, a seperate Vassal of Praetoria that channels there advancements in return for massive payment. The biggest advancements Praetoria has are Trans-Tunnel IGFTL Drive, providing incredibly fast intergalactic transit to ships as small as frigates. The Oculus implant, an augmented reality device implanted directly into the eye, that uses the standard cortex processor.

Praetoria exists as a federation of sorts, with each region having its own devolved government. These local governments create laws applying to that region. Alongside these regions, RARCom, FleetCom and MoI all create their own laws that apply to their institutions. The praetorian regions by population are as follows;

Domoculus - The core systems, including the capital New Praetoria. While most well protected, the contribution to the economy from these systems is small, their cultural control over the other regions is indeniable. Domoculus is the both the seat of power, but also the heart of Praetoria's entertainment and leisure industry. Any form of vice is readily available.

Phobeon - The industrial might of Praetoria, and home to the world spanning ship yards that produce FleetComs warships.

Red Pass - A large stretch of systems that once provided logistics to various frontier wars. Now it's a stellar highway, connecting Phobeon to Shekor. The planets in this region are an archaeologists dream, showing signs of civilisation back to the earlier dynasties of the DSM.

Shekor - Praetoria's financial sector. While underdeveloped compared to many others, Shekor has grown popular as an Overgalactic banking destination, with fiscal laws to match. Vast sums of reserve cash is kept within Shekor. Primarily in Brittanian Sterling, and United Systems Dollar.

Averkon - The precarious border with chaotic space. Sparsely populated, these frontier worlds appear to be of little value. FleetCom and RARCom however maintain a heavy presence here.

Terminate - The closest tip to Nehellenium is a military stronghold, and the final region shipping traffic passes through on its way to Nehellenium.