Attila Erös is a former officer of the Magyar army and currently in Soviet service as a super-cyborg known as the Pantokrator. 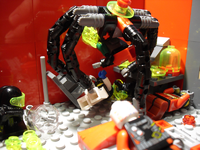 Dr Semenov punishing the Pantokrator/Attila for his disobedience

Being one of the most competent officers in the Magyar army, Attila preferred to fight right next to his soldiers, which proved to be rather fatal during the Battle of Visegrád in BR 2,016. There he was struck by a tesla coil rendering him unconscious yet not fully killing him. The Soviet chief surgeon Dr Sergey Semenov saw potential in him and abducted him to his secret laboratory, where he rebuilt and reprogrammed Erös into a killing machine under his command.

Henceforth known as the Pantokrator, he was sent on a couple of covert operations while his master remained in the lab, working on all sorts of diabolical creations. This cyborg super-soldier unleashed his full potential during breaking into a prison complex on Planet Kisvárda freeing several high ranking Soviet personell, including Dr Semenov who got captured after being defeated on Planet Brest. However, as he was about to strike down one of the defending Magyar officers, he recognized her as his daughter Abigél Erös bringing Attila back to his former self for a brief moment. He spared her life yet had to return to Semenov's lab.

After a while, Attila began to fully realize what happened to him, which drove him insane as he went on a rampage through the secret Soviet lab. Unfortunately, Dr Semenov preempted Erös, who was unable to attack his slaver due to a built-in failsave system, that would shut down all life support system should he harm his master in any way.