Brickville is the name of a nation that was formed somewhere in 2001, but joined Brikwars a decade later. 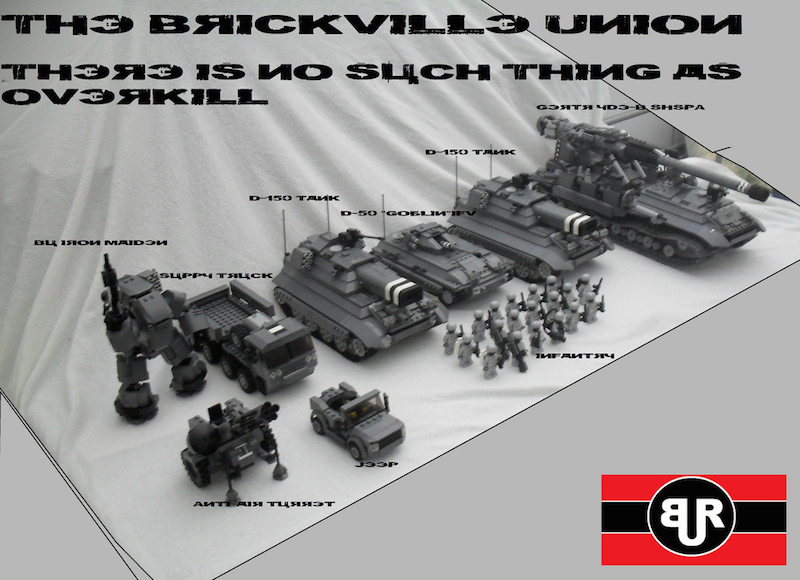 A sampling of Brickville forces.

On Old Earth in 1945, German scientists were working on a new kind of rocket that could change the course of the war. However, their time was running out. The Allies were already in Germany, and it wouldn't be long before they were captured.

Earlier that year they’d heard strange radio messages coming from space. So the scientists thought some kind of alien had landed on the moon. If they could launch their rocket to the moon, and fill it with information about Nazi fetishism, the aliens might help them win the battle.

The rocket was launched from a secret facility, two weeks before its capture by the Allies. In orbit, the rocket was damaged and failed to crash land on the moon. Instead it was left floating trough space.

Several years later, a small projectile crash landed in the Brickmountains, near the Brickville capital. When they investigated, they found a kind of pod with a giant Iron Cross on it. They brought the capsule to a laboratory where they were able to open it. It contained many books filled with strange writings in a strange language. Brickville kept all of this a secret, because none of the other nations had this kind of technology yet.

A few years passed, and much of the writings had been translated. Brickville finds out about all Nazi weapons, prototypes, ideas, ideology and culture. In secret they began to develop and produce V-2 Rockets, Maus tanks, nuclear bombs, intercontinental missiles and other very advanced weaponry.

However spies of one of the other nations found out and demanded that Brickville share the technology. Brickville had two options:

-Give them the technology, and thus helping their old enemy to become a very big threat to the world, and more important, to them.

-Refuse to give them the technology and declare war, with the risk that their new weapons still are not enough to defeat them.

Brickville lies about more documents that needed to be translated. The other nation believes it for the time being. In secret Brickville develops, with the technology of the Nazis, a nuclear device.

After Brickville scientists were certain that it would work, the nuclear warhead was fitted into an A-10 (AKA America rocket) and fired upon the other nation's capital. When the other nations saw the destructive power they launched a full assault on Brickville to stop them once and for all. However their crusade failed because they were not prepared to encounter heavy tanks, jetpack troopers, or even infantry with machine guns. Also Brickville possessed jet engine bombers, while the other nations still used bi-planes. The entire military force of the other nations was destroyed.

After this Brickville didn’t invade the other nations, but waited until they had enough military forces to do so.

The other nations formed a Communist alliance to destroy Brickville. Hate against communism grew among Brickville citizens due to a grand propaganda campaign. However soon the communist commandos took over a Brickville nuclear launch site, and launched several rockets on the capital. In reaction Brickville launched all it’s other nukes at the Communist cities.

With the planet’s environment destroyed, life began to crumble. Due to the enormous craters created by the blasts, some kind of energy came to the surface. This blue-ish energy proved to be an excellent fuel replacement, and it could be used for weapons. It later was called Petrusite.

While the world was dying, Brickville scientists made a spaceship that could travel to a near planet that contained much more Petrusite. Also leaders, generals, military troops and equipment were shipped to the planet to create a Fourth Reich (inspired by the Nazi fetish documents in the capsule).

After the Exodus they started to make a capital; Neu Berlin (New Berlin). Also the head of state was now appointed with the new title of Führer, and the state would be called Brickville Union of the Fourth Reich, or short Brickville Union. Soon the planet became a large industrialized world, producing all kinds of weapons for galactic dominance. The first thing they did was destroy the old world with more nukes than ever before launched, destroying and deforming most of its life.

Now the Brickville Union stands before its greatest task. To dominate as many planets as possible, and destroy Communism and Peaches forever.

The Brickville Union is perversely inspired by Germany in WWII, however without the holocaust because that information was not in the Nazi Capsule. Like the Germans they like high quality products. Thanks to the nationalism they see themselves above anyone else. They hate communism because they destroyed the old capital. The head of state was the Chancellor, which later was called the Führer. The military plays a crucial role in everyone’s life, since everyone has to do something with it. Some are factory workers, while others make weapons, and others pack food for the troops. However some factories are underground, and it’s known that most of the people working there don’t see sunlight in their entire life.

The people speak normal English with a small accent. However they use their own alphabet. 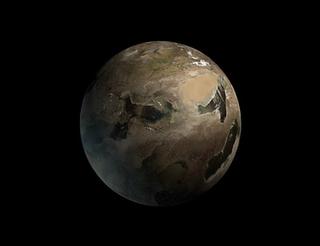 The old planet was were Brickville was created. It contained two kind of climates, a warm and a cold. The planet consisted of one large continent, and a smaller island next to it. Also three other nations were present on the planet.

Later the planet became a wasteland because of nuclear fallout. The Brickville Union has a settlement there and have reported they’ve seen many mutated survivors. In secret they began experimenting on them.

The other world, known as the Fourth Reich, is a more harsh enivronment. But it was industrialized very fast. Without a special mask you can’t breathe the air. Most of the deserts have been transformed in enormous factories. Even so the Brickville Union drilled deep in the planets core for minerals and to build underground factories and cities.

It is known that an enormous ancient device is located in the center of the planet. However its origin is still unknown. Not much wildlife lived there, and most of it was destroyed due to the industrialization.