From BrikWars
(Redirected from Liteside)
Jump to navigation Jump to search

The Farce is a humor field that powers the BrikVerse and binds it together. It is created by all laughing things, and disrupted by anoraks. Some societies and organizations think of the Farce as a non-corporeal sentient entity that might be capable of intelligent thought, while others simply consider it something to be manipulated and used as a tool. There are as many different groups of users and views of the Farce as there are uses of the Farce itself.

Sides of the Farce 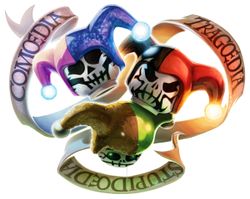 Minifigs with ability in the Farce can use it to alter reality to become much funnier. LiteSide, SnarkSide, and DimSide Farce users use the Farce to gain power, although in different ways.

LiteSide users, who often join the ranks of the LegitEye Knights, use their powers to entertain everyone with situations of questionable hilarity, such as cutting people's limbs off and saying things like "Speak weirdly I do not!" and "Making fun of me you should stop!" They are known for preaching that anything is funny "from a certain point of view."

SnarkSide Farce users, by contrast, are mostly interested in entertaining themselves. They use their powers to frustrate and humiliate others, doing such things as cutting off their oxygen, electrocuting them, and inflicting terrible puns that no one else thinks are funny.

DarkTron Lords dress entirely in black and wear masks or opaque visors, because victims find the lack of face disturbing.

The unfortunate third group of Farce users, the DimSiders, tap into the Farce through their own unwitting stupidity. Once they start down that dumb path, forever does it dimminate their destiny, cursing them to a life of comic relief as mindless puppets of the DimSide. Blessed with Dimmy Strength and a thick-headed invulnerability against forces of logic, they are sometimes able to eke out brief careers as jesters, town fools and politicians. Inevitably the DimSide consumes them, and they join the mindless ranks of the Dimmies. 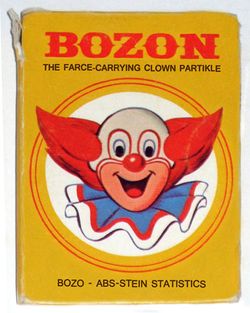 Mad-science-minded Farcisists believe in the existence of a theoretical "Clown Particle," called a Bozon, which mediates the interaction of ABS-based matter with an all-perversive Farce Field. This theory is highly contested, resulting in periodic flare-ups of mass murder between the physicist and mad-physicist communities.

Religious Farcists believe in a Living Farce in which the Farce potential of an individual is measured by their mini-clown count. Mini-clowns are mystikal creatures, nearly the same size as a regular minifig, but with mini-clown-car powers that allow them to pack large numbers into a single minifig.

Mini-clowns continually speak to minifigs, telling them the will of the Farce in the form of jokes of varying quality. When minifigs' minds are quiet they hear the mini-clowns speaking much more easily, so Farce-sensitive minifigs constantly strive for greater stupidity and mindlessness, especially by taking part in violence and mayhem.

Renegade quandrum physicists propose that the Bozon has the mathematical properties of both a subatomic particle and a full-sized mini-clown simultaneously. This obviously makes no sense whatsoever, and is therefore completely consistent with what is known about the underlying nature of the Farce.

Farce users are often Heroes. In fact, the Farce is usually what makes a minifig into a hero, whether or not they realize it. A user of the Farce is able to perform heroic feats such as telepathy, psychokinesis, and enhanced physical and metaphysical perception. The Farce can be used to bend the will of weak-minded beings and guide an adept's body. Users who were very good at using the Farce can cease merely reacting to their surroundings and actually predict events in the very near future, such as the next blow in a duel, by using their sixth sense of humor and thinking "wouldn't it be funny if." The Farce can be used to defuse situations, or to shock victims like lightning.