From BrikWars
(Redirected from TLA)
Jump to navigation Jump to search

The T.L.A. (Three Letter Acronym) is a remnant of a major extragalactic civilization that arrived in the Galaxia Nehellenium after their original homeworlds were overrun by a mysteeeeeerious alien menace. By Koincidence, the system that they chose as their new home was situated on the border between the Scythian Empire and the Brittanian League, forcing them to immediately choose sides in the Immortal War. They sided with the Anti-Immortal Alliance, and as a result the Refuge system has been under constant siege by the Britannian fleet for almost an entire Rekonstruktion.

The T.L.A. (Three Letter Acronym) were once a roving band of mercenaries in a distant galaxy. Inspired by the flourishing civilization around them, they decided to claim a few unowned planets for themselves and set up their own enlightened, democratic society, with (as was the custom there) a three-word name that reduced easily to an acronym. For a time their new nation was wildly successful, colonizing many planets and filling their skies with vast orbiting shipyards that churned out some of the best transports and warships in the galaxy. Their fortunes changed when the galaxy was attacked by a mysterious alien menace that swept through the once-mighty Galactic civilization, destroying, looting, and assimilating all who stood in their way. The T.L.A. converted their orbital shipyards into self-contained colony vessels and escaped the galaxy entirely, shortly before their home worlds, along with all who had elected to remain behind, were overrun.

The T.L.A. arrived in an unclaimed star system on the border between Scythian and Britannian space, and were immediately challenged by an Immortal battle group. The resulting battle involved multiple factions from both sides of the Immortal War, and ended with the Immortals and their allies driven from the T.L.A.'s new home. However, the Britannian League soon retaliated and invaded Refuge, driving the T.L.A. into a hidden network of underground caverns. Vastly outnumbered, the T.L.A. attempted to even the odds by raiding an archaeological dig site for Deadly SpaceMan teknology. They acquired a Gyro Pistol, a relatively insignificant artifakt by itself, but scans revealed traces of Deadly SpaceMan DNA on the weapon. They were able to sequence this DNA and clone a Deadly SpaceMan to lead their forces against Brittannia. In a single decisive battle, the cloned DSM drove the Brittannians from Refuge. Currently, the T.L.A. is fighting with Brittannia for control of several planets in the Blue Sector.

The T.L.A.'s government is a representative democracy with an extremely extensive system of checks and balances and zero voter participation. In practice, this means that politicians cannot get anything done and simply vote themselves back into office at the end of each term. Only a major crisis, such as the Brittannian incursion, can motivate the politicians to take action or the apathetic citizenry to vote. The presidential election is something of an exception, as citizens consider it to be a kind of competitive sport. Since R. 2,008, the office of President has been held by Bob the Unbuilder, a former construction worker and part-time mercenary. Unable to exert much influence over the government, Bob spends his time leading the T.L.A. army into battle atop his custom-built hover killdozer. 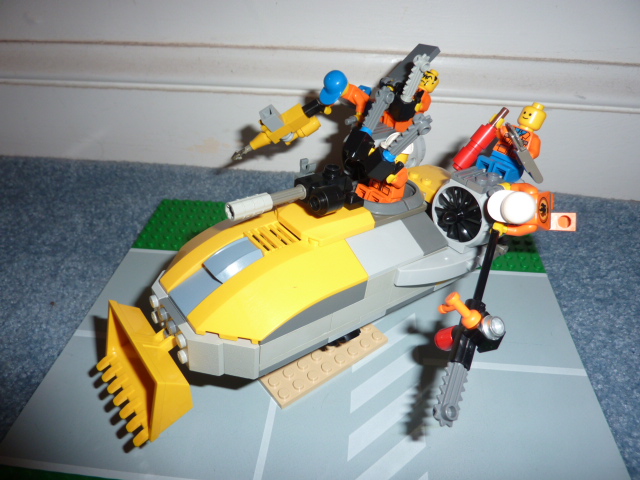 The T.L.A. are master shipbuilders, due to their mastery of fusion technology and ultralight ABS construction material. However, as they arrived from a galaxy much less violent than their new home, their weapons technology lags behind that of many other factions; in particular, they lack the fine control of energy required to construct laser weaponry, relying primarily on projectiles and missiles. Their missiles are quite effective, however, due to their expertise in shipbuilding.

Recent teknology exchanges with Bavaria have given the T.L.A. more advanced Plasma and Tesla weaponry.

In battle, the T.L.A. rely on the superior speed and agility of their vehicles to hit and run, launching concentrated attacks on key targets and then retreating out of range before the enemy can react.

The T.L.A.'s spacecraft favor missile weaponry and typically engage at a distance, using their superior maneuverability to (hopefully) keep out of their opponents' range. Most capital spacecraft are also equipped with spinal rail guns that can destroy large enemy vessels in one or two hits. The T.L.A. deploys fighters in a purely defensive role, using them to keep enemy strike craft and torpedoes away from their capital ships.

T.L.A. ground vehicles are almost always hovercraft and can cover ground at extremely high speed. The T.L.A. make heavy use of APCs to deploy their troops quickly and outflank the enemy, and fighters and gunships to provide air support and deploy troops behind enemy lines. Most infantry squads contain integrated scouts to pinpoint targets for heavy weapons fire, allowing T.L.A. vehicles to attack with incredible precision.