Bavaria is a small, but powerful nation that is able to wield considerable power through military strength and subterfuge. They are a monarchy led currently by Kaiserin Renate. 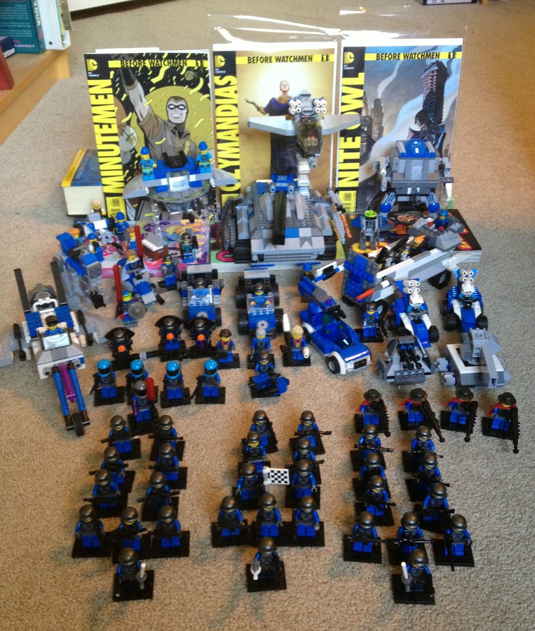 A sampling of Bavarian forces

Bavaria is predominantly Cuthulic, with the first Bavarian Kaiser Arminus having a giant Oktopustika carved into his chest. He and his army would fight completely naked and covered in blue dyes. His traditionalist army of barbarian crusaders and knights triumphed over the nations on Bavaria. Thus the color blue is said to be a victor's color, and why most buildings, vehicles, and articles of clothing contain some variant of blue. Also the Oktopustika and BrikThulhu are popular images for Bavarians.

The more religious of Bavaria think of Piltogg as an agent of BrikThulhu because of his Oktopustika token, and like him because he wears a traditional lederhosen under his uniform. However the vast majority of Bavarians still view Klaus as a capable and unquestionable leader of Bavaria.

Aside from Cuthulicism, about 10% of the total population is Jewish. Jewish minifigs make up a good portion of the scientific community and the nobility.

Here's what it's like to be an average Bavarian:

So you're wearing your lederhosen and eating a sausage with a stein of bier close by. You've also got a bit of a belly, but that's okay. Certain levels of fat are considered beautiful in Bavarian society, and they're very common as well. You're also probably an inch or two taller, and whatever mess you make by dropping your sausage is quickly cleaned by mobile janitors. Mobile janitors are janitors that are transported quickly through Bavarian megacities to clean up messes. Depending on what world you live on, it's probably pretty crowded. Bavarians are hyperfertile, and many methods of contraception don't work. It's also very common to have twins when pregnant, and average family size is 4-8 kids. These kids will be taught how great and honourable it is to kill and die for your nation in Kindergarten, as well as how to fight with several weapons. As the kids get older, they are taught that Bavaria is the greatest nation and culture in the Brikverse.

As for the culture, the military, physical labor and the nobility are idolized. People take pride in their individual efforts and successes, but they also believe in working to benefit society at whole or the nation. This is why people who are good at mining, drilling or working with their own hands are popular. You may also want to visit a park or forest if you live in a megacity, as they are very well preserved but still open to the public.

Bavaria is ruled by a Kaiser or Kaiserin who controls and influences every aspect of the nation. However, the time needed to manage an interstellar nation constantly at war is ridiculous, so a Kaiser gives power to local and established leaders on each planet. These planets are ruled according to the wishes of the Reichstag, a group of representatives elected by the people, who advise the Kaiser but also carry out his orders.

Currently, Bavaria is the last active nation in the Third Alliance, and as such, it is the biggest target of NATO. Despite being the enemy of several Superpowers, many small nations have allied themselves with Bavaria.

Bavaria's closest relations are with the nations Venice, the T.L.A. and the Krakow Union. The Venetian based Space Mafia rules over most of Bavaria's underworld, and Prinz Karl "Gustav" Von Bavaria is married to Il Duchessa, a high ranking Venetian Duchess. Bavaria funded the TLA as soon as they proved themselves as effective fighters against their former Britannian rulers. Despite the small size of the TLA, Bavaria trades and provides a lot of supplies and arms to the nation. The former Kaiser Klaus von Fynnvaria and President Bob of the TLA were also fairly good friends.