AN*US forces prepare to volley the TA fleet in Winter Has Arrived.

The A.N.*U.S-Third Alliance War was a conflict between the Allied Nations*United Systems collective, and the Third Alliance. The war was the result of straining tensions over the departure of members of the Third Alliance from the Allied Nations general assembly due to Avalonian diplomatic communiqués counterfeited by General Atazir on March 30, G.R. 2012. The departure of these members would hinder the A.N's ability to promote violence and as such required the application of violence to solve the problem.

Originally, plans for any war were instantly killed when the Brittanians immediately veto'd a motion to deploy peacekeepers in the Security Council. It was only when members of the general assembly voted on a resolution to take matters into their own hands did the war begin. 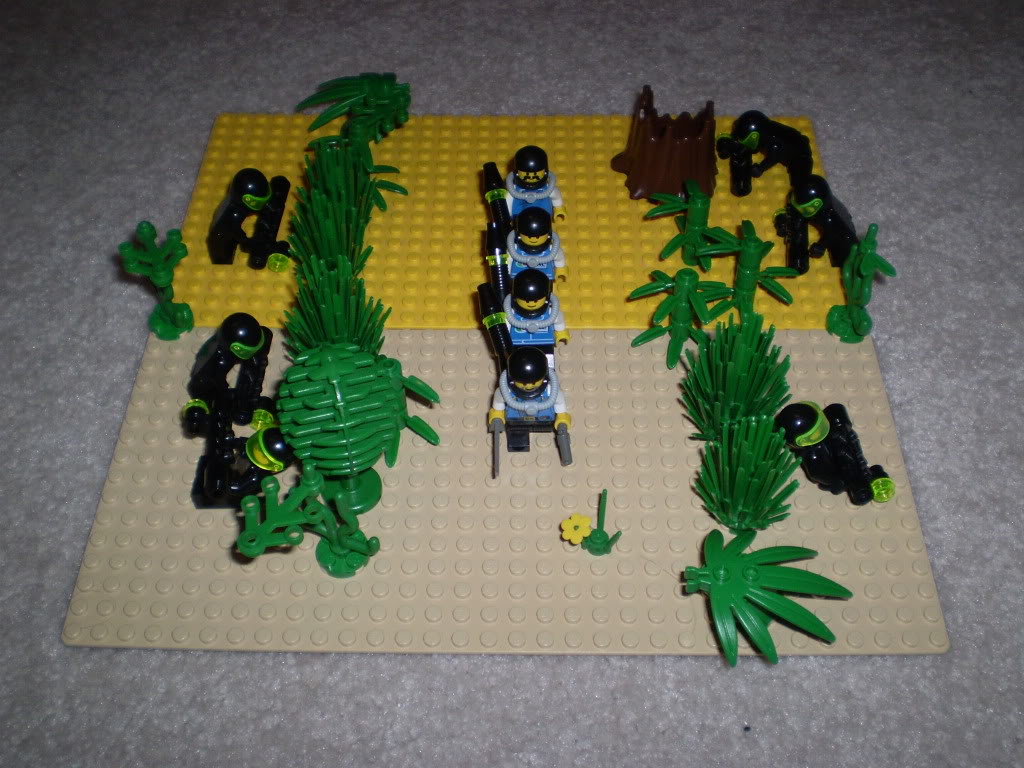 The first point went to the Third Alliance, when in an astounding show of balls, the Avalonians kidnapped president Angela of Trattoria. This was immediately responded to by the Infiltration of the Zupponn Mining Co of the Avalonian home planet, they set up ambushes, disrupting movement of Avalonian troops and resources. The ZMC campaign successfully harassed the Avalonians.

The next major engagement of the war occurred on the RIN border, with a combined fleet of Trattorian and Praetorian ships attacking a mining operation, guarded by RIN, Akkadian, Bavarian and Scythian vessels.

However, halfway through the battle a force of Trattorians showed up and blasted the hell out of themselves. These ships were sent by Siri, who filled the power vacuum left by the President Angela and took the opportunity to become Kaiserin of Trattoria. Trattoria then joined the TA.

Various other engagements occurred throughout the AN-TA war, including an assault on Praetorian shipyards. The State of Vergilius Raskolnikov attempted to attack the Allied Nations in the confusion of the AN-TA war, and a rogue USA fleet attempted to strike at the home planet of Vergilius Raskolnikov with a stolen AN amygdala-disruptor cannon in retaliation.

The First Battle of New York

The final point went to the Third Alliance, who used advanced war portal technology gained in Project Amerikabomber to deploy a Third Alliance coalition force of seven-thousand ships straight at the USA planet of New York and destroy the Allied Nations Headquarters in Operation Iron Sky. An account of this epic battle, titled Death of the Alliance, is compiled here.

The AN was attacked by the Third Alliance on New York. Billions of people were killed in a massive space battle above it, and the AN headquarters was destroyed by Geraldden Mercenaries. The attack on New York was led by Kaiser Alec I on the ground and by a coalition of Kaiserin Siri and Zweitekaiser Klaus of Bavaria(who brought only a token amount of ships).

Because the kingdoms in the Third Alliance are constantly vying for Piltogg's favouritism, Zweitekaiser Klaus had to make both the Silvarian Empire and Britannian League surrender to him if he wanted as much glory as Alec or Siri. So, he executed James DeSilva, a Britannian Statesman and father of a Britannian Admiral, and destroyed the capital city of Pendragon with FLEIJAs (nukes without radiation).

The Parliament and Monarchy were killed in the blast, but Queen Victoria V, as it turns out is an immortal. She declared war on the Third Alliance and now Admiral Byron DeSilva, organized a counterattack on the Bavarian lines on the planet Bohem.

The war ended with this: "Yeah, I think it's time to fold it. The AN is hereby officially dissolved." Colette, BR 2,012 Following the occupation of New York by the Third Alliance forces.

The Second Battle of New York

Months later, the Praetorian Empire had constructed the then-largest ever dreadnought, the Inexorable, and launched an offensive to retake New York. The USA and Scythia also united against the TA, and although Bavaria summoned the Angel Sahaquiel to the battle by sacrificing millions of Silvarians, the neu-AN won the Second Battle Of New York. Neu-AN forces then liberated the planet from TA occupation. The AN-TA war began again, and Trattoria regained a pro-AN, democratic president after the assassination of Siri, thus strengthening the neu-AN forces. Forum Thread: Second Battle of New York 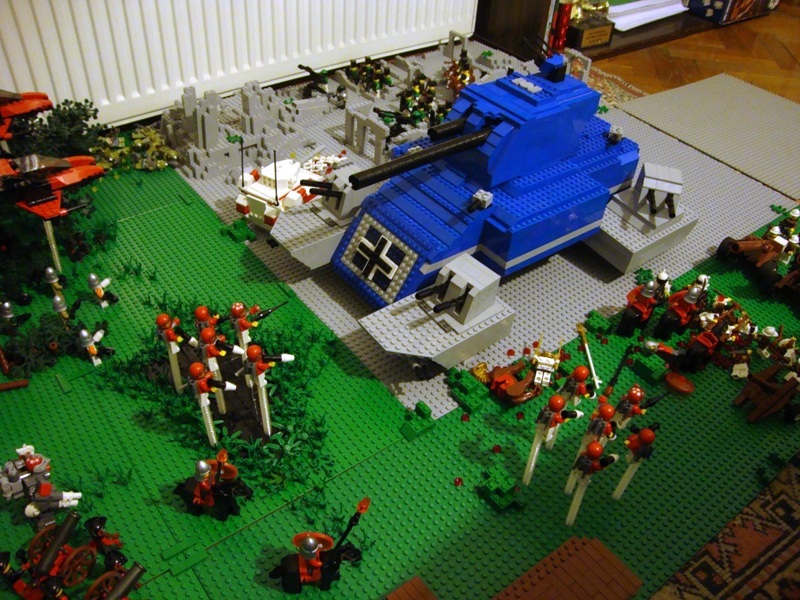 NATO forces engage the Bavarian Panzer Grosse in the Battle for the Yutonian Map.

The Second Battle of New York revitalized the AN-TA War and many battles ensued. A list is provided below.

The AN*US Ripper rams the Akkadian flagship Dethstar over Medivo.

In G.R. 2014, Piltogg set out towards Medivo in search of the Skully Grail as a part of the Quest of Piltogg. Piltogg realizes the AN's involvement after noticing the incompetence of his crew, a side effect of the PAX Corps' amygdalar-limbic disruptors. It turns out that the Allied Nations secretariat had faked its initial destruction in the First Battle of New York and had absconded with its OT stockpiles to construct a warship-sized OTC, a countermeasure against Medivo's anti-teknology field. Led by Captain Panda Ranuker as well as Peacenik and the Lux Jehoel, AN*US reveals its goal of gathering the technology, resources, and cheap bullshit tactics of a hundred star empires under the guise of intergalactic diplomacy. This was in order to stop any empire or minifig (such as Piltogg and the Artifax) who tries to concentrate too much awesomeness in one place and risk destroying reality, as the Deadly SpaceMen did when they shattered the First BrikVerse.

An ongoing account of this battle can be found in Rainbow War II: Jellybean Apocalypse: Grail War (link top thread when finished).

Assault on the Starlark space elevator over the planet Zugkraftsburg

The Neu-AN Treaty Organization, or NATO, was formed out of the "Neu-AN", an unofficial collection of countries wishing to re-establish the Allied Nations after the Second Battle Of New York. NATO boasted some of the largest Veto Powers, Superpowers, and Great Powers in the galaxy. NATO then gathered its tremendous forces to launch an assault on Bavaria’s home star system of Fleck in Operation Dominion's Call, thus subjugating the empire and silencing the last active backer of the withering TA. Bavaria has called upon many allies from both the old Third Alliance as well as newer forces. 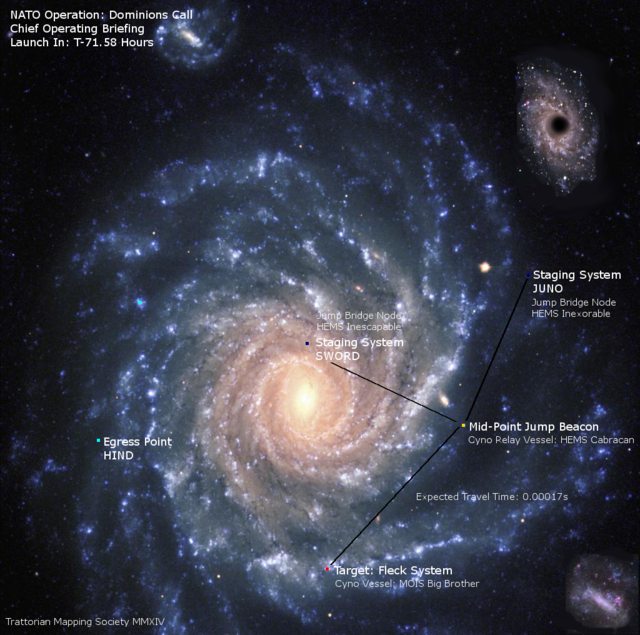 As outlined in an international briefing on Operation Dominion's Call, the attack plan was for Trattorian and Praetorian forces to convene with the Assyrian fleets at Staging System Juno while the USA Eisenpower carrier group organized at Staging System Sword. They would then slog the long way along trade routes until they convened at the Mid-Point Jump Beacon, where they used the stolen Der Vorsprung (courtesy of the Trattorians back in G.R. 2013) to warp to their destination in 0.00017 seconds, bypassing all anti-FTL measures. The Britannian, Scythian, and Polish fleets gathered at Portsmouth in the Grey Sector and launched directly towards planet Bavaria.

In the meanwhile, Bavaria pulled support from the Pan-Germania region, members of the Third Alliance, and some miscellaneous new factions. Of note were Bavaria’s home system defenses, the superpower Venice, and the rapidly growing navy of Luchardsko. The Bavarians also had strong motive and homefield advantage, as well as numerous surprises and superweapons like the artificial Angels used in the Battle of Vanderheim.

Planning for Operation Dominion's Call began in late G.R. 2013 while actual combat lasted for almost a year. NATO brought combat right to Bavaria's doorstep, fighting on its homeplanet and throughout the Fleck system. Many battles were waged in that timeframe. 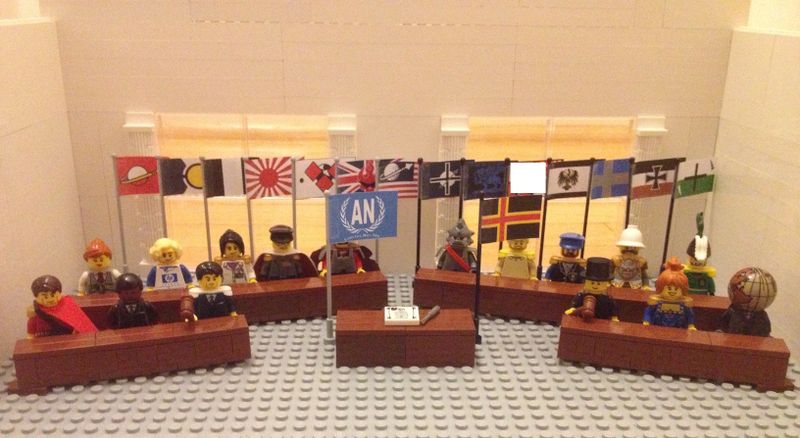 Heads of state of both NATO and TA nations gather in the Palace of Versailles in the Kingdom de Lance to sign the Treaty of Planet Versailles.

In February G.R. 2015, diplomats from Trattoria, Venice, Bavaria, Praetoria, and the USA met in secret on planet Versailles to discuss a possible end to the war. They drafted an agreement and spent the next several months lobbying their home governments and other member nations within their alliances to approve the treaty. On May 1, G.R. 2015, heads of state and representatives from 14 star nations as well as NATO Secretary-General Stolenburger and TA Herr Direktor Man in the Top Hat gathered at the Versailles Peace Conference to formally sign the Treaty of Planet Versailles, thus ending the AN-TA War. Uberkaiser Piltogg was unable to attend the conference due to contact with him being lost over Medivo.

The treaty is presented below:

Due to the indecisive stalemate in Operation Dominion's Call, neither section regarding NATO or Bavaria conditional concessions took effect. Major consequences of the treaty include the reestablishment of the Allied Nations with a full membership, including the Third Alliance; galactic hegemony of the Space Mafia; maintenance of Third Alliance sovereignty and existence; and of course, the end of the AN-TA War.