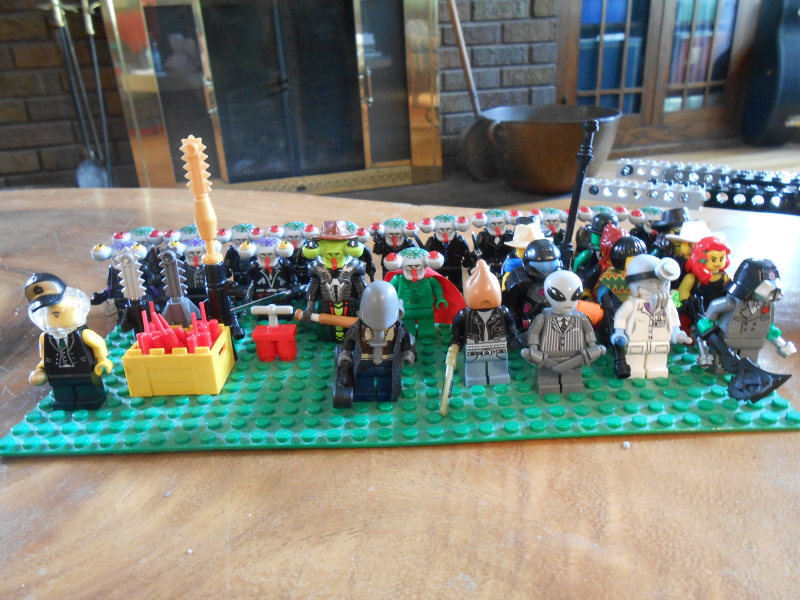 The Sicilian Command and the Venetian Syndicate

One of the largest syndicates of organized crime in the Brikverse, it has a strict hierarchical structure and code of honor. It holds complete domination of the criminal underworlds of several major powers, such as all current and former Third Alliance member states. Their home system of Space Sicily is under the control of Venice but at this point Venice and the Space Mafia have a symbiotic relationship, the mafia receives official support, and Venice gets trade connections and tax on the significant black market. A very brutal organization, it goes about its operations with a professional cruelty matched by few. Some of it's highest (and best paid) jobs include blowing the head off of a man at his brother's wedding, taking over a G20 power in a day with less military intervention than a pickup game of B-Ball, and cutting the hands off a woman while belittling her and her society. (see "appearences")

The Space Mafia gains cohesion through two main things, one, their cultural and filial ties to Sicily, and two, The Family, a spiritual entity created by the force of devotion by the combined Mafiosi across the Brikverse, it has grown exponentially more powerful with the additions of successive Star Nations underworlds. At this point it could be considered basically a Deity. Being the psychic amalgamation of the minds underworlds of a large portion of the Brikverse has some drawbacks, for one, most common street criminals are not that smart, so The Family possesses a fairly average intellect, and has poor impulse control. This makes it very relatable to the common folk. With all the power The Family wields, they really only use it for a couple things. Firstly, they enforce Omerta, the law of non-cooperation, this divinely enforced law physically makes it impossible to speak of Mafia business without the knowing implied consent of the Mobfather. This power was created by former Mobfather Silent, who sold his ability to talk for it, and has only been broken by Scratch, when he traded allegiance for Venetian support in his coup against Silent. The other power The Family uses is physically appearing in the Mafia headquarters Limo to provide FTL power and supernatural attack and defense capabilities.

Following the emergence of The Family as a fledgling psychic deity, the Mafia began treating with extraplanar entities of ancient origins.

Founded in Space Sicily to resist DSM occupation, the close knit families soon broke apart into factions and wars over territory. Several major families escaped into the Brikverse to establish their own crime empires, including the Five Families of Planet New York. In BR 2,010 The Police State of Venice conquered the Sicily system with the aid of a family patriarch, Godfather Scratch. With the armies of Venice at his back, Scratch consolidated his power in the system and crowned himself Mobfather, and set about expanding his efficient and well run underworld to the rest of Venice.

In BR 2,013, Il Doge brought forth to the Third Alliance, a merger between the Sicilian Space Mafia and the various disorganized underworld organizations and crime syndicates into a united Third Alliance Mafia. This proposal was accepted and the Space Mafia now has a major stake in all current and most former Third Alliance states. During the Pwny War, the Space Mafia nearly destabilized Trattoria with RbT trafficking. They have used this to exponentially increase their influence and income. On 4/13/ 2014 Mobfather Scratch signed an agreement wherein the Space Mafia gets exclusive distribution rights in their sphere of influence, they preform corporate espionage and sabatoge in the interests of protecting ZMC's GT monopoly. In several recent, they took over the under-developed nation of Emeria's underworld as well as the underworld of the Frangerian Protectorate.

The Space Mafia's organization goes like this, there's the associates at the bottom they do most of the moneymaking, the soldiers collect the cash,and they report to the Caporegimes, who all report to an underboss. The underboss reports to the boss (usually the governor of a planet's underworld) and the boss reports to the sector's Godfather. The Godfathers all report to the Sicilian Mafia, and instead of a Godfather, they have a Mobfather, figurehead and schemer behind the whole operation. associates and soldiers usually are incharge of most of the petty crime and protection rackets. The Capos and Underbosses do midlevel crime and administrative work on the planet, while the boss takes care of high level crimes (art heists, financial fraud, insider trading etc etc.) with a team of Lawyer orks. The Godfather of the sector takes care of both high level, multi-planet schemes, and any bribery/"monetary diplomacy" that is needed. His twofold jobs are as a check to lower levels, making sure the organization hasn't been infiltrated, and keeping the criminal monopoly going in the system. In the case of smaller empires, he can act as the representative of the Space Mafia to the leader, and can use his organization as a mercenary intelligence organization. The Mobfather, currently Scratch, keeps all the lower Godfathers in check, and acts as a representative to larger empires and the brikverse at large. He maintains a sortof "cabinet" of exceptionally talented mobsters he employs for high profile jobs and administration of the near-Galactic organization.

The Mafia Gains Control of a Nation

Takeover of the Third Alliance underworld

Raid against the Trattorian Special Administrator

The Fall of Starport 73

A bunch of these chat battles

An Important Message to the BrikVerse from OASIS