HISTORY OF THE SILVARIAN EMPIRE

It started in G.R. 1,770. The Britannian League was overpopulated and with overpopulation, came an absurdly high amount of impoverished and criminally insane minifigs. They eventually decided to send the most impoverished (also terrorists) from the planet Erie and the criminally insane from all over. The Erish were sent to the planets Bohemia, Bohem, Fenia and Chaplan. The criminals were sent to a planet already discovered by Captain James Hills three years prior. A planet filled to the brim with undead, daemons, vampires, werewolves, warlocks and surprisingly dimmies. The criminals were only dropped on the planet once. After the Britannians heard of this, no one ever disrespected the king or his awesome satchel ever again. The criminals became tribes. The criminals' children were born with no explanation for the world they lived in. The tribes were nomadic and tough, but they fought each other for resources, leaving more undead. Eventually it was discovered that the easiest way to kill the undead, was with silver. This was discovered by the Great Silvar Tribe, also known as Clan Roberts. This tribe was unstoppable. They were feared by the undead and other tribes alike. Warrior Chief "Grizzly" Robert Silver later assimilated other tribes into his, and eventually united all of the tribes. Now instead of a Warrior Chief, he was known as a warrior king. He used brute force to rid the planet of undead, daemons and warlocks. He eventually killed all of them save one warlock. The warlock was known as a traitor because he helped lead Robert's troops in the battle, taught Silver flaming techniques and gave his troops fireproof suits. It is unknown how Robert is still alive. The Silvarians say it's because he beat the shit out of death until death just gave up. Others say that Satan has his hands full with other heroes killing daemons once they die and that all gods are afraid, because enough of his silver and flaming could kill them.

The Silvarian Empire once controlled 31.5 systems, but lost some over the G.R.'s. Today the Silvarian Empire controls 15 systems, has a powerful army and navy and can be a great ally or a fierce enemy to anyone in the galaxy. Although nominally sovereign, Bavaria de facto subjugated Silvaria when Kaiser Klaus killed King Grizzly Roberts in a duel and seized the throne. Prinz Klaus Jr. then genocided a large amount of Silvarians to summon Angels.

In Silvaria, the empire is managed by the King, and each planet(minus silvaria) is ruled by a thane who has a collection of armies and a space fleet. A thane can Challenge the king for the throne but each thane that has tried has ended up in a skullpile of the kings' enemies. The King can also kill a thane if he sucks at governing or fighting. If he is unsure about a thane's usefulness he will often lock him in a room with one of his hell mutts and give a treat to the victor. 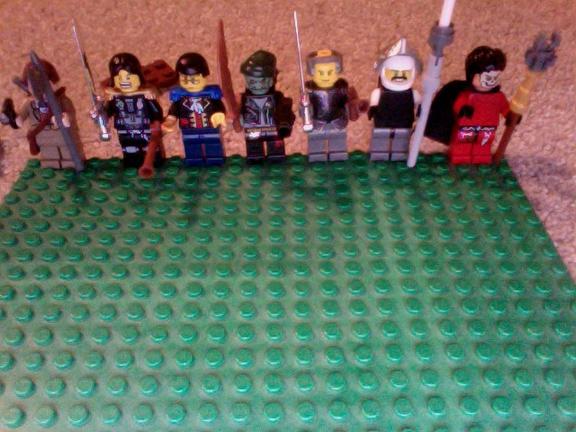 A few of the thanes of the Silvarian Empire

Before the planet was bombarded by criminal minifigs, Silvaria was a Daemon's planet. Portals of the underworld allowed Silvaria to be a capitol for Daemons in the Brikverse. Daemons would train for war, get drunk and party on Silvaria. They would corrupt stray Majistiks and practice the art of necromancy. The Human Clans fought hard against these daemons, and used captured Daemonic weapons against them. The Clans fought against and allied with each other but destroyed the portals on Silvaria. The Daemons trapped on the planet summoned undead and fought side by side with the dark majistiks. The Clans were one day united after Chief Grizzly Roberts united the clans and discovered Silver weapons, the cure for undead. He killed all the daemons and dark Majistiks as well as the undead. To stop citizens from becoming undead, a silver disc is put in the spine of every Silvarian citizen. Those who refuse are made into lower class.