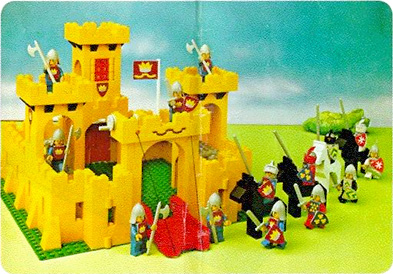 In the 1,978th BrikVersal Reconstruktion, the ancient Royal empire perfected the art of hinged castlery with the construction of Yellow Castle 375. While the fates and possible yellowness of the previous 374 castles have been lost to history, Yellow Castle 375 remained the unchallenged pinnacle of castlebuilding for generations to come, until its fade into obscurity and final mysterious disappearance in BR 1,983.

Why is it so oddly colored? Well, what else is commonly yellow in the BrikVerse? Minifig skin, that's what. The bloodthirsty knights of the Rays, Crown, Clover, and Hazard Stripes flayed their victims alive and wallpapered their keep with the skins of their kills. In ages since, rumors and sightings of the Yellow Castle in far-flung mist-shrouded frontiers have been reported from remote explorers, pirates, and fugitives. None have been confirmed.

Legend holds that it rests on an enchanted island on the world of Medivo, and it will one day return in glory to restore the true Royal Yellow King. Until then, the noble bloodlines descended from the true Royal source have fractured and vie for supremacy and familial bragging rights.