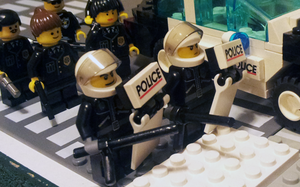 The Man comes around.

Many countries and empires maintain a strong police force to deal with the inevitable crimes that occur in a society where everyone aspires to become a mass murderer. Unlike in the Human world, such feats of violence are respected and glorified parts of a minifig's everyday life. Police forces don't exist to prevent or punish homicidal rampages, but merely to regulate them at a government-prescribed level and to otherwise maintain their governments' executive monopoly on mass slaughter.

During periods of low homicide rates, police forces really have no good reason to exist other than to annoy and ticket speeding drivers, consume copious amounts of ABS doughnuts and coffee, and engage in the occasional shootout or awesome high-speed chase. These have the effect of disgruntling the local citizens, thereby increasing the likelihood that they will go on wild murder sprees.

These cops are housed at PoliceStations, of which there is usually at least one in every town or city. PoliceStations are quite large, but only have room to hold 1 or 2 kriminals at a time. This tiny inmate capacity is rarely an issue because every cell has at least one breakable or missing wall, a design innovation which has been found to be an effective means of preventing prison overcrowding.

Cops are divided into Precincts (sometimes called Districts or some other bureaucratic word). Precincts watch over entire regions. On a world level, as mentioned, this is typically one to a few in every city. At the space level, whole sectors of space are placed under the care of a particular Precinct. These Precincts work with one another to engage in the business of Law Enforcement from the largest sector based metro PP right down to the smallest backwater FringeWorld Sheriff's office.

Players may create one of these Precincts when creating a new faction. This allows any number of players to have a "Police Faction" under the Community Content guidelines.

The SpaceCops began as an elite secret police force operating under the reign of the Tron legions. They were tasked with hunting down and eliminating the enemies of the various emperors, any non-yellow minifig, and anyone who thought that wearing black all the time was too somber. As a result of Imperial paranoia, the SpaceCops were often used to find and destroy any relatives or potential heirs to the Empire, often extinguishing whole bloodlines on the whim of the Emperor. After the Darktron Empire crumbled due to a lack of minifigs willing to claim Imperial lineage, the SpaceCops all but disappeared, fading into obscurity and squabbling amongst themselves over who to serve, and what their new uniforms should look like. The organization was embroiled in a bloody and drawn-out civil war, with many minifigs killed, maimed or otherwise inconvenienced. Just when it seemed that it would never end, it didn't.

The end of the war came During the Gray Shift, when they were finally able to decide on a new uniform. It was gray, because gray was totally in right now.

The SpaceCops, armed with their new stylish duds, for a time waged a xenocidal campaign against any non-standard minifig, such as Squidheads, Peaches, and any minifig without a SpaceCop-certified™ face/facial expression. SpaceCops are diametric enemies of space pirates, anything space pirate related, and the Space Mafia. They basically function as the brikverse's international police force. They coordinate local and national police departments and chase criminals across Nehellium but regularly ignore petty things like national sovereignty and minifig rights FOR GREAT JUSTICE.

The SpaceCop main Headquarters is One PP, sometimes called Spacecatraz. 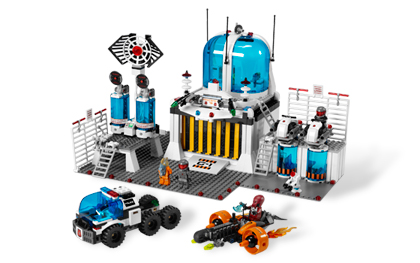 A Space Cops base.