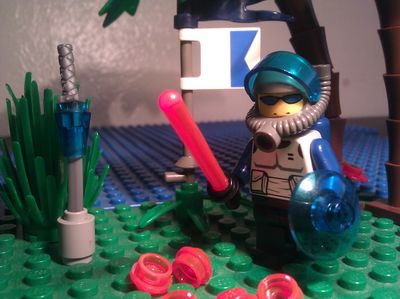 Nagirrac pictured in battle armor with the OT Beamsaber, his plasma shield and his ancestral blade.

In R. 2,011, a transmission reached the inhabitants of the BrikVerse from Avalon. In it, a battle weary captain named Semaj Nagirrac explained how his homeworld had been attacked by "foreigners" and pleaded for aid. He had no idea the impact the transmission would have on the fate of the BrikVerse.

Within weeks he was able to muster the remaining forces of the Imperial Army of Avalon and organize a successful resistance. At first, he and his men took a beating, but things began to look up after he was rescued from an Ying Si ninja fortress and killed General Atazir, leader of the foreign invasion. When he had gathered enough strength, he led the liberation force that broke the power of the foreigners and exposed a plot by King Sulien to turn Avalon into a second IceWorld and sell the Orange Transparent material to the other inhabitants of the Brikverse at the expense of Avalonian lives. Nagirrac was ready to bring the traitor king Sulien to justice, but a Warhead Splinter teleported in Sulien's place and ended the king's life.

Nagirrac was elected High Chancellor of Avalon and did all that he could to bring his backwards kingdom to the same level of the rest of the BrikVerse. The Warhead Splinter proved to be a major obstacle into making Avalon a great power. When Nagirrac saw just how destructive the splinter could be, he ordered the being sentenced to death. After the Battle of Hopklis Nur, Nagirrac led the highly controversial trial of Uther Pendragon.

Throughout his entire career as High Chancellor of Avalon, Nagirrac searched tirelessly for a worthy candidate to become the King of Avalon, even reestablishing the Rites of Rulership, an ancient custom on the Avalonian homeworld of Cyrmu. His search was cut short, however, as he was captured by still-alive General Atazir, and imprisoned in the old stronghold of Elwyngweth. Using Nagirrac's seal, Atazir sent false messages to the Third Alliance and Allied Nations sparking the infamous AN-TA War, that ended with the destruction of Avalon and the break up of the Allied Nations. Nagirrac lived long enough to escape his bonds, kill Atazir once and for all, but was struck down by an Ying Si Ninja as he was escaping Elwygweth. His body was presented to Mordred, master of the Ying Si Ninja Society, but disappeared shortly thereafter.

The death of Semaj Nagirrac was marked as a dark day in Avalonian history. Refugees everywhere speak his name in reverence. There are some who believe he is not dead, but is merely biding his time, waiting for the right opportunity to return.

Inhabitants of the Universe