From BrikWars
(Redirected from Vorhut)
Jump to navigation Jump to search 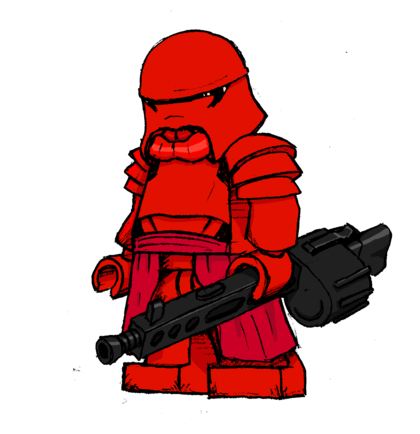 A Molochite Paladin, Elite Holy defenders and crusaders of the order. Art by Ninja_Bait

The Moloch Vorhut (Literally meaning Moloch's Vanguard), Sometimes referred to as The Order or as the Molochites are a fantical religious cult from the Monolith Realm

The Order started as a group of zealous mutant hunters who defected from the Imperiya. Today it is a Militaristic Theocracy that hails from the Delta plate Cluster of the Monolith Battleplates. Worshipping a god and beileving that he reincarnates himself in the form of a new leader every time they die. They are Violent, xenophobic and fundamentalist, The Vorhut Order has grown to become quite despised in the politics of their world.

Vorhut travels from plate to plate, spreading the will of their deity, Molokh. Their code dictates that the "Impure" must be destroyed. The Order is openly hostile to pretty much any outsider that doesn't fall in line. It is not uncommon for Vorhut to enslave nonbelievers and use them for dumb labor. Their deeds put them at complete odds with the Svoboda Clan, who oppose them on moral grounds, and of course the Black Legion who they see as a great Evil on the world. *Which they aren't entirely wrong on*

Order soldiers will often accompany Molokh Monks to towns in their territory on "Prayer Days" Where the Monks will stand outside of a town and call for some, or all of it's residents to come out and participate in their Holy Prayer. Vorhut acts as the enforcers to the Religion, and those who refuse, or are suspected of breaking their laws are taken away and enslaved or killed. Towns harboring "Fugitives" such as Mutants will often send them into hiding during these visits. The Prayer Days are a leading cause for conflict between Vorhut and neutral towns and settlements. However within the Delta plates, the heartland of Vorhut's power, there is little outside groups can do about it.

The Moloch Vorhut is an Authoritarian religious police state that exhibits a fanatical attraction to Tradition, Religion and Xenophobia. Criminals are killed or enslaved. And any outside group that threatens to interfere with the Faith's interests will often be attacked without a second thought.

Vorhut is controlled almost entirely at the whim of a single individual, known as the Grand Master. very few of the Grand Master's underlings hold any real power or significance.

The Vorhut's military forces are made up of several Castes. Formations generally consist of a mixture of all groups. Anyone of a lesser caste must obey and respect anyone of a higher caste, under threat of being labelled a heretic.