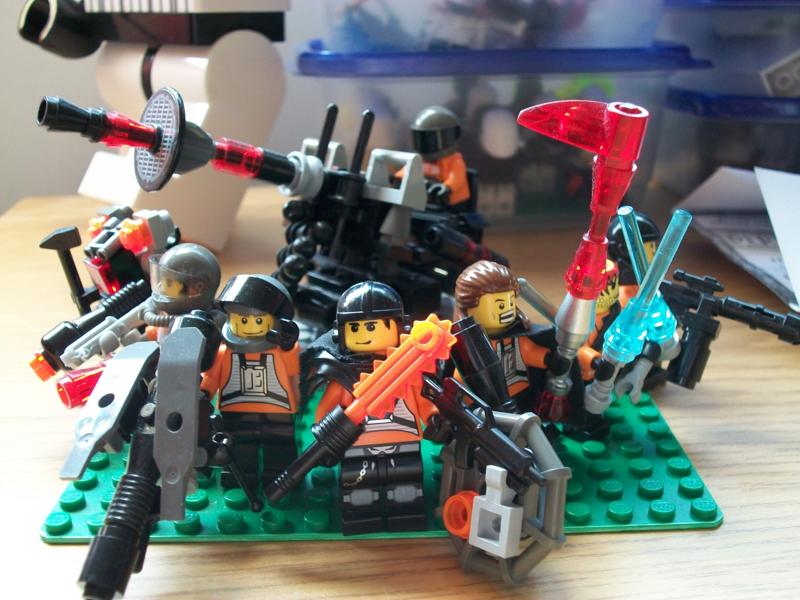 Some FELC troops and Admiral Ross

Some time after the Grey Shift, in BR 2,008, a relatively unknown force entered the Briksphere. Known as the FELC, which stands for the Federation of Extra-Terrestrial Conquest, the damaged fleet dropped out of a Warportal on the edge of known space, pursued by a wing of the USA's Empire Cruisers. The fleet of small craft crashlanded on a abandoned planet on the edge of the Assyrian Star Empire. The resultant battle finished in a rout of USA's fleet through Assyrian intervention. The USAs retreated to the Warportal and returned to their space, destroying the Warportal behind them.

The area of space in which the FELC was stranded was hostile. On the edge of the largest space empire in the galaxy, several factions hunted among the region. Fanboys rode rockets mocked up of ancient movies and the militant group of the Mutant/Peach Alliance pestered the escapees. The former leader of the FELC, Prince Toast, died in an attack of Dimmies and an amminsanic warrior known as AmmoMan took command.

The FELC began establishing an empire, making contact with the various inhabitants of the galaxy. Several FELC pilots hired themselves out to the space force of the After several battles and the building of a small empire- farther away from the Assyrians - they embarked on a journey pursued once again by numerous enemies. They discovered the hidden planet of Arkane, where Ammoman discovered his true name- Ross Varn. Subsequently, amid a battle with the BIN and Pesgores, the entire force vanished, leaving behind receding traces of battles and a flaring war over a hill. The history of the FELC seems to end here, in late 2008 G.R.

Until the latest sightings.

Late in the year, rumblings were detected in the Briksphere. A patrol squadron of the USA ran into a previously uncharted area of space, where they were ripped apart by a fleet of frigates on the borders of this new empire. Reports run to the fact that Ross Varn, thought dead, commanded a fleet of ships as they tore into known space. New ship designs and new Superweapons sightings have been reported, and rumors of a huge army of FELC Brikwarriors have rumbled. A broadcast to the hypernet was cast to all systems on full auto override.

"You thought you could forget us. Those who resided in the back of your mind. Just another upstart empire, annoying the big fish."

"That is true no longer. This time, we return. This time, the FELC will make it's name felt. It shall carve its name next to the giants, on the face of Brikwars itself."

"I return. Let the battle begin."

This Hypernet transmission appears to signal the beginning of preparations for war by nearly every single space-faring empire in the Briksphere. The Immortal's empire began to contact empires and collect information, resulting in a clear division- those who are with the Immortals, and those who are allied with the Scythian Empire. The FELC, on contact with the Immortals, demanded an audience with the Emperor. Admiral Ross talked to him, and came out declaring that the FELC would support the Immortals on all fronts of combat. The latest information readouts released to the public support the rumors of a improved army- the FELC's main line of troops have been, quote, "Hauled Over", resulting in the troopers seen here. However, Ross has been pensive lately, ordering large scale information surveys on both the Immortals and the Scythians. Some rumors say that he has been regretting his previous decision to support the Immortals. He could not be reached for further comment.

Several weeks after this, the battle known as the Fall of Fico occurred, decimating the Gamma Corps headquarters and homeworld and leaving countless casulties behind when the Immortals took Fico with the aid of several large empires and the FELC. Midway through the battle, Admiral Ross turned the guns of the FELC WarFleet on the Immortal Fleet and declared that the FELC would no longer tolerate the Immortals. After the battle was won by the Immortals, the FELC fled Fico with the remainder of the Scythian and Gamma Corps defense fleets.

The inevitable combat between the Immortals and the Scythians has begun. As of now, the FELC has found an ally in the Scythian Empire and aids the resistance against the Immortal Onslaught. Admiral Warhead of the Immortals has issued a termination order on Admiral Ross for, quote, being a "backstabbing bastard."

The FELC enters a time of internal conflict at this point. The Arkane Guard, their major technologically advanced partner in the area, sides with the Immortals and begins skirmish actions on the border, causing conflict among myriad colonial planets that are contested between them. The FELC has pulled most of their forces off the major battlefields of the period, instead concentrating on repelling attacks by the Guard, Immortal Forces, and Vergilius Raskolnikov's Star Empire. The remaining troops are elite Point Trooper squadrons, known as the Western Core Force. They are led by Admiral Ross Varn. Recent intelligence suggests that the Eastern Core has dug in on major planets in the empire, intending on making a fight until allies are able to reinforce their heavily-damaged fleets. [See files: Alighieri Incident and War for Remarque]

The FELC has developed a teknology of Small Arms, using a Mrson Generator to, quote, "effectively burn through material objects with a long stream of particulate lazer power". As such, they have become one of the Alliance/Federation's largest small-arms operators. They are lacking in large vehicle construction technologies, however, depending mainly on Arkane Guard teknology traded before the war.

A elite MkI Point Trooper is outfitted with weapons capable of storming the heaviest base. A main-line trooper usually takes several seasons of campaigning and battle to advance to fully-capable Warrior Core status, seen here.

At the end of 2011, the FELCian Empire was gearing back up to war, assisted by the Briktopian Empire and assorted forces of the Anti-Immortal Alliance. Rumors were trending to predict a cease-fire declared between Vergilius and Warhead, aimed at destroying the homeworld and government base of FELC operations, Capital.

The FELC withdrew from most engagements during this period, instead focusing on waging it's war of defense with the Immortal Empire, as they pushed against the borders of the Federation's space. Advancements in personnel-aid vehicles and hardsuit technology meant the edge between victory and defeat, and as the Guard shoved from yet another direction, the FELC retreated to their core system of worlds, focusing on the war of attrition between the gathered forces as time pushed on. Eventually, after many campaigns and thrice-fought over worlds, a sort of balance had been achieved and the war mainly ground to a game of engagments as borders shifted and turned. The FELC continued on apace, developing a new set of mobile weapons technology known as MCTN, capable of engaging the Immortal SHDTs at range and on the field.