The Epistocracy of Briktopia was founded in BR 2,009 on Strazzel IX only a few months after the dark ages ended in that system. Initially the Briktopians warred against the Krude Konstruktion Kingdom which was helped by Deadly Spacemen.

In early BR 2,010 the Briktopians were forced to leave Strazzel IX in an Exodus which led them to the system of Reval. Some time later, towards the end of R. 2,010, it turned out that the Krude Konstruktion Kingdom was secretly funded by the Immortal Empire.

Now, in BR 2,013 the conquest of Reval by the Briktopians is in full swing. At the same time, the Briktopians are improving and growing their military in preparation for the upcoming Immortal War.

The system of Reval is only a few sectors away from Strazzel IX where the Briktopians originated. It consists of several two-dimensional planes floating in space. Some of the planes are covered with baseplates but most of them are barren plains with a few brick constructions here and there. The minifigs do not know what these planes are made of, neither does it matter to them. They are solid, they can walk, build and fight on them.

Reval is not uninhabited though. Deadly Spacemen reside here. There have been sightings of the Krude Konstruktion Kingdom, Pirates and as of late even Akkadians.

Like all minifig civilizations of the BrikVerse, the sole purpose of the Briktopians is constant warfare featuring the most hilarious amounts of wanton destruction. Where possible the Briktopians will follow the way of SNOT, finesse and color coordination.

Briktopia is led by Mirduk, the philosopher king, and appointed Archons effectively making it an Epistocracy. The philosopher king has mastered not only the art of warfare or how to rule but is also learned about quasi-immortality. In case he is killed he mysteriously returns.

Every other minifig in Briktopia belongs to the guardian caste which means they are brought up and trained as warriors. Most Briktopians get standard training which makes them proficient users of most arms. Some receive special training and become pilots or specialists for certain purposes (e.g. for close or unarmed combat, sniping, fireworks etc.). The most talented ones, whose skills vastly exceed those of the regular guardians, are given command over parts of the Briktopian Armed Forces as Strategos. They are the true heroes of Briktopia.

When they are not waging battles all the Briktopians spend their "freetime" in a virtual reality environment similar to the Maytricks. There, they relive the battles fought on a place called Revalus, putting them back into a time of medieval warfare. The philosopher kings designed this virtual reality to both quench and produce the bloodthirst resident within all Briktopians. Also it serves as extra training grounds. From time to time some know-it-all minifigs claim that due to the nature of the BrikVerse and the power of koincidence, the protagonists and happenings on Revalus, even the place itself, is anything but virtual. Those minifigs are duly executed. 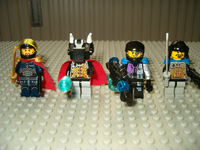 Mirduk, the philosopher king, is the supreme ruler of Briktopia. It was him who at the dawn of the Dark Ages created the ideal minifig society based around constant warfare.

Apollyon (K.I.A. Blueprints Turn 9) was the most prominent hero of Briktopia. It was him who first suggested to start building superweapons. Currently was last concerned with organizing and training the Briktopian Ghost Division.

Colonel Raszack is the commander of the infantry and thus the main bulk of the Briktopian Armed Forces.

The Briktopian Armed Forces (BAF) are currently rethinking their doctrines of land, air and space based combat. New weapon systems are under heavy development with the Immortal Conflict in mind.

The bulk of the BAF consists of troopers in auxetic armor bearing standard pulse rifles. The infantry also uses support vehicles like the Jaguar Armored Car or the Ozelot 4WD truck. There are also specialists with extra training and equipment, e.g. the close combat troopers.

The Ghost Brigades are an elite force inside the BAF. Formed for special operations they are trained by Apollyon and equipped with advanced and overpowered weaponry mostly purchased from Alltimate, an interestellar weapons manufacturer.

The backbone of the Armored Division consists of the Avenger main battle tanks. There are a multitude of other tanks and armored vehicles in use as well, like the Delta siege tank, the Schreck light assault tank or the Prowler.

In BR 2,012 the Briktopians started using superweapons in form of the Vindicator SHDT.

Construction of an Armoured Core has begun in BR 2,013 and there are plans to eventually build a SHIP, too. 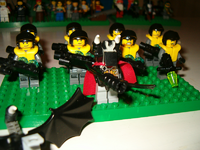 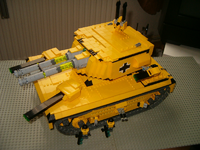 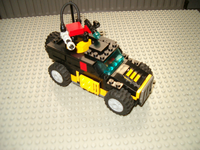 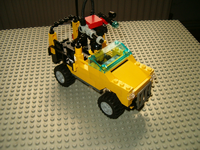 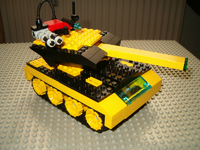 The Briktopians are part of the Anti-Immortal Alliance. As such they have fought alongside of the FELC on the world of Remarque.

Enemies of the Briktopians, apart from the factions native to the Reval system like the Krude Konstruktion Kingdom, Blokbots and Pirates, include any faction from the Immortal Alliance, with the Akkadians in particular.

A small skirmish between Briktopian and Akkadian Forces on Reval.

All Quiet on the FELC Front Forum Thread