From BrikWars
(Redirected from Pwnies)
Jump to navigation Jump to search

The Pwnies are a strange and often reviled race. They appeared in force in the BrikVerse in BR 2,012, but were first sighted as far back as BR 2,010. They infest the hellish dimension known as the Friend Zone, a pocket dimension of Silvadream, but it's unknown whether they originate there or are just dimensional travelers.

Many other factions hold strong opinions on the Pwnies, and do not hesitate to prove their point by force, particularly their allies in the Akkadian Empire and their enemies in the Trattorian-led Anti-Pwny Alliance. Thus, despite their paralyzing Friendship sorcery, the Pwnies have caused plenty of violence, indirectly as well as directly, and that's always good. The first recorded sighting of a Pwnie, at a pirate party on Charybdia.

Pwnies come in many forms, but all are of the ekvine genus. Some are almost indistinguishable from common horses, some are brik-built creatures. Others are weirder still, not made of Leg-Ore at all, but some unknown otherworldly material. All Pwnies share the same basic biological traits, however: Four legs, mane and tail, and insatiable bloodthirst. 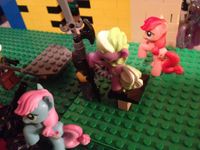 There are four distinct castes of Pwnies, found in all of the race's forms. They are as follows.

Kamikaze Pwnies
Kamikaze Pwnies are winged Pwnies whose job is to crash into the enemy from above, exploding and taking as many foes with them as possible.

Redneck Pwnies
Redneck Pwnies make booze and get drunk a lot. Their families are big and highly intraconnected.

The Herd
Ordinary minifigs who have been indoctrinated through pwny propaganda. The Pwnies use them as expendable cannon fodder on the battlefield and as infiltrators to spread their ideology to other minifigs. The magikal world of Ekvestria is the home of the Pwnies. It is a beautiful planet covered in green fields, verdant forests, glittering lakes, and giant impact craters. The magikal power of Princess Killestia is so great that she can move entire stellar bodies with a thought. Therefore the Pwnies do not need spaceships; the Princess just moves the entire Ekvestrian solar system to wherever they want to wage war, smashing Ekvestria right into the enemy planet.

My Little Pwnie
First appearance of the Pwnies, in brick-built form. Forum Thread

Chasing Rainbows Part I: The Elements of Harm
President Bob the Unbuilder tells the story of his first encounter with the Herd. Forum Thread

Chasing Rainbows Part II: My Little Warships
Bob the Unbuilder leads a T.L.A. fleet to raid a Herd facility before the Britannians can secure it. Forum Thread

A Lovely Picnic
A giant Pwnie organizes local horses into a violent uprising against their Bavarian masters. Forum Thread

The Chain of Command and an Alliance of Friendship
Kaiser Klaus of Bavaria inspects captured Pwnie specimens. Forum Thread

Some Bavarians and Pwnies
Kaiser Klaus meets with a Pwnie delegation to coordinate attacks against Trattoria. Forum Thread

God's in his heaven
Kaiser Klaus uncovers the Pwnie conspiracy in Bavaria and forces their cooperation. Forum Thread