Badass and manly metalheads, though and proud fighters, habitants of a wild planet were only the best survive. They are some of the BrikVerse's awesomest warriors, wearing leather, dominating the roads with threaded death bikes and the battlefields with War Guitars. They, rock.

Long ago, from times that not even the eldest remember, the remaining headbanging minifigs set foot on Hellius. And from that very moment, they knew that they were at home. They formed clans and spread through out the untamed planet, building settlements and early mastering the musical arts. Soon, with some exploring they were able to develop electrified instruments and once again they felt the spark. By that time there were still many dangerous creatures lurking, and a group of the manliest, strongest and best guitarsmen was formed, to protect and conquer the Metal Realms. They were called, Metal Warriors...

Soon, a Golden Age of Metallic Creation came, and the very best tunes were remastered and plenty new ones created.

By the following centuries, events shaped the MWs and their peoples lives forever. Invasions, clan wars, evil summonings, cataclysmic natural disasters... Despite many loss and pain, they became stronger and made unparalleled feats and constructions against impossible odds. These feats are still remembered today and the sons of the epic warriors inherited their might, making them fighters that could easily be matched to the DSM, Terrorkhan or Ice Worlders.

With the arrival of BFenix through an ancient and mysterious portal, they were about to enter a new age. New adventures and challenges awaited them!

The MWs developed the most amazing instruments and sound systems, making them so powerful they could be used as weapons of war, the main manufacturer is SPI. The most venerated of these is the War Guitar, weapon of choice of most warriors, providing death and musical entertainment. Despite the musical crafting, MWs also create great vehicles like uber death bikes, mekanical avatars, power armor and even salvaged and modified weapons from other star civilizations. Space crafts are very rare in their garages and hangars, so they never left their system since they landed on Hellius. Also, the mighty castles and fortresses built during the Jugger Summonings are a proud achievement of military architecture. Besides their somewhat rebellious and barbaric way of fighting, the MWs have recently organized some of their lesser warriors, commonly known as Metal Militia, into some sort of military ranking and organization. You know those dudes that start moshing right away at the minimal breakdown? Constantly drunk and shoving everyone around? Those dudes are the Beerzerkers and if they're wearing some armor and are given bat-shit crazy instruments of mayhem, they're a blood-lusting whirlwind of destruction.

Metal Warriors have also brew their very own booze with the help of BFenix. He called it Warhale and its powerful as shit! It's brewed like normal beer but with extra pure powdered OT ore, giving it a funny and mighty taste that only true drinkers can stand. Slightly less potent than the well known Maniac Beer.

Although there are numerous religions and deities worshiped through out Hellius, the Metal Warriors highly believe in The Metal Gods, or simply put, in Metal. It is not a stricken religion, some simply have more faith and dedicate more time to it than others. Like The VoL, North mythology is probably the second most venerated religion.

New Metal Warriors are carefully hand picked by the veteran ones, giving the strongest a chance to join the honored ranks. The most defining phase of a MW training is acquiring his protective Fenris Cloak. New recruits are sent to the Fenri Moon (aka Land of the Wolves) were they must track down, slay and skin a vicious Alpha Fenris, pack leaders of the huge Fenris wolfs that inhabit the cold and desolated moon. The trainers return after 2 weeks since they left the recruits, and those who fail are left there until they succeed or otherwise, until they're dead. Earning his Cloak is one of a warriors greatest feats, as it is a symbol of honor and pride, for he will wear its skin over his armor for the rest of his life.

The Metal Warriors are sworn allies of the Space Vikings and Space Pirates, sometimes also with The VoL, which visit Hellius occasionally for grand feasts and celebrations of whatever. 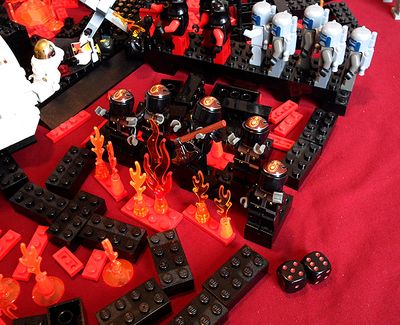 Metal Warriors were so psyched into their Metal, they were forgetting to snatch the Maniac Beer being fought over in Assault On Goatse Bunker. Don't throw women-in-the-kitchen jokes around the Steel Bikini Komandettes, unless you want to taste a knuckle sandwich. They're rebellious gals, so they hang with the Metal Warriors all the time.
Retrieved from "https://brikwars.com/wiki/index.php?title=Metal_Warriors&oldid=6896"
Category: