The Ketir-Iah, whose name roughly translates as "The People of Many Moons," are an extraordinarily ancient star empire of cursed techno-sorcerers. So old is their empire that even the name and location of their originating world is lost to myth and legend. Long ago, they spread among the stars, distributing their power haphazardly through their entire intergalactic domain. They were naturally quite powerful and so were also careless. They never consolidated power, they rarely made advancements in magic or science past a certain point, they paid little heed to tactical and strategic considerations, and they knew very little threat from their neighbors...who they subjugated mercilessly. They scattered their empire recklessly toward each new delightful vista with all the hedonistic, monstrous arrogance of the truly potent. They would learn. 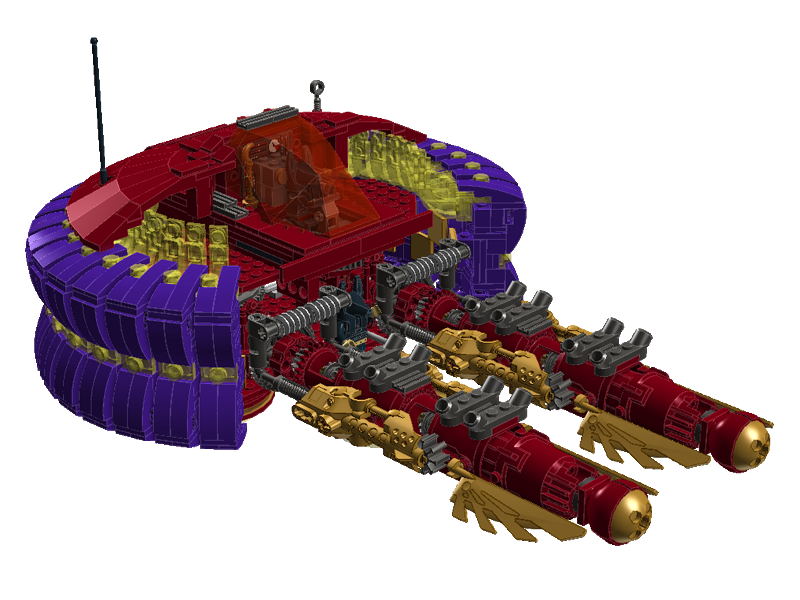 Rise of the Commonwealth

The Ketir-Iah trod on entire races and cultures with impunity, rolling over their governments and claiming them in the name of Kherita Neguom, what they still call the entirety of their domain. Some cultures were given preferential treatment over others but most were made to be the slaves of the vast empire. Even the lowliest of the Ketir were powerful sorcerers who could bend reality to their will. Rekonstruktions meant little to them, as they were already much involved with travel through time and space when the Deadly SpaceMen broke the universe. For the Ketir-Iah, the sundering was an amusement which they would have cheerfully high fived the SpaceMen for, had they the nerve to stand in the even greater empire's presence. In any case, it little affected them and they continued their relatively consistent romp through the universe.

The Ketir, as societies of tyrannical overlords go, wasn't overly paranoid, strict, or generally concerned with the state of things. Their slaves were given free reign until such time as a Ketir needed something; at which point he would just casually use his magic and compel a nearby slave to do it for him. The people of many moons did not tend to consider those not of their race as people to be controlled so much as tools to be picked up and used. For many, this callousness was insult to injury and a fiery hatred burned in the hearts and minds of those so used. The embers of a rebellion caught and spread like a wildfire throughout Kherita Neguom.

The enslaved legions knew that direct action against their masters would only result in failure. The sorcerers would swat even their vast numbers like a single fly. Their derelict teknologies had been no use to them in resisting the empire in the first place and further development wasn't likely to yield any results soon. But they had watched, and learned, from the Ketir-Iah for thousands of years. All that lore and knowledge had been passed down from generation to generation, expounded upon and theorized about. Studied, dissected, analyzed, and even occasionally field tested (using some unwitting Ketir accomplice), the Ketir-Iah's sorcery was unwrapped, it's mysteries largely discovered. The enslaved knew more about Ketir-Iah magik than the sorcerer's did! While some of the rebellion had magikal abilities, none rivaled the Ketir brand of sorcery, which no one but the Ketir-Iah had access to. When the rebellion formalized, it seized upon this idea and set about a plan to steal the sorcery from its masters.

Their first innovation came in the form of magikal negation. They developed a technique to temporarily slow the flow of magik that came from any given sorcerer. With some teknologikal development, now determined to be useful given focus, this ability was ramped up to first a full out stoppage on an individual and then on an area. But the result was only ever temporary. The rebellion knew it could not win with only this teknology. Still, its use gave them time to plan and grow in power. Primarily, it gave them the ability to abduct sorcerers and the time they needed to perform experiments on them. The rebels took their overlords one by one and performed unspeakable blood sciences on them in secret. This shadow war would wage for years and still, on the whole, the Ketir-Iah were oblivious.

Finally, after long years of tense struggle, the shadow rebellion unlocked the mystery of Ketir-Iah Sorcerous Control. They found the answer buried deep within the sorcerers' genome and they plucked it with ease. Within moments of it's discovery, a truly prodigious advancement in magikal science, the rebels had transferred the ability to use the Ketir Sorcery to themselves. They rose up as one, calling themselves the Commonwealth, and began to light to whole of Kherita Neguom ablaze. If this were a different universe, this story would be theirs.

The Culling and the Curse

In the end, it was inevitable that the Ketir would not remain dopey, careless children for long. The Commonwealth came out of nowhere and it smashed into them, shutting down their god-given magik (taking with it their entire sense of identity) and obliterating them with centuries old prejudice. The Ketir-Iah ran, and fought, and died in shameful droves. But the secrets, abilities, and teknologies the rebellion had discovered and created took time to travel to more remote parts of the empire. The Ketir were decimated but not yet ultimately defeated. They were driven from their own space as the Commonwealth took control. But this unthinkable destruction was, ironically, the savior of that crippled people. For here, amid the sounds of battle and the furious fight, in the gratuitous splashes of gore and the adrenaline thunder of martial combat, was something so much more Fun than gallivanting around the universe looking for a new beach to sit on. And, as it turned out, the Ketir-Iah were good at fighting. Their culling awoke in them a bloodlust that had lain dormant for eons.

And so it was that the first advancement their people made in magik came by way of war and so have many of their innovations since. Their magiks made them stronger, faster and tougher. They could become giants on the battlefield and they could hurl bolts of power at their foes, flaying skin and muscle from bone. But still, this would never be enough for the newly reawakened Ketir. They needed more. And as they fought back against their former slaves, not so much attempting to regain dominance so much as merely enjoying the moments of battle, they began to develop a more sophisticated understanding of their own magik. They discovered a way to connect all the parts of it, in each individual, and in doing so grasped at the power of Godhood. In those moments, the Ketir-Iah could've done anything with all that power. They could've mended the broken universe and placed themselves as masters. They had reality in the palm of their hands. They rejected it. They had been a boring people, doing boring things, for thousands and thousands of years. That time was over and best buried beneath new, blood soaked memories. So they cursed their own magik, simultaneously dealing a heavy blow to their enemies who used the stolen power and who doled it out to their own allies and causing its use to become challenging and interesting again in their own eyes. Now, the Ketir-Iah could start fresh, developing sharp minds and sharp bodies from the ground up.

The Commonwealth, meanwhile, had no idea of the goings-on. They consolidated their power, they organized and planned, and they swept out into the long black night like a holy crusade to hunt down their former oppressors once and for all. And, in doing so, in one fell swoop, the Commonwealth crippled itself with tainted, stolen power. The Ketir-Iah counter struck and the first blows of a very long, very bloody war were exchanged. Inch by inch, the Ketir-Iah regained some of their former territory until, eventually, the war ground to a halt. The Commonwealth were not defeated, exactly, but the Ketir had lost much interest in their formerly challenging opponents. With a new kind of callousness, born from the transmuted arrogance of the last, the Ketir-Iah abandoned the conflict and set out into the universe, forging a new Kherita Neguom and searching out new teknologies, magiks, and challenges to add to their repertoire. The Commonwealth's Rage is a thing of power now, infinitely magnified by their defeat and ever deeper insult. It burns in all the fires of the BrikVerse, warming the hands of soldiers and blistering their flesh.

The Ketir have participated in several engagements since leaving their original space but none so massive or involved as the Devoid Sector's Ecto Conflict. Having just finished a campaign in a nearby sector, a command group learned of the genocidal war the Jormangandr Clan of the Gunnar-Grim was perpetrating upon the natives. Interested, the group sent scouts to assess the situation. Events followed rapidly, with the Grim wiping out the natives and spawning the Zeitgeisteskrankheit, who in turned spawned the emergence of Ecto-115. The Ketir-Iah were about to turn away when their scouts reported on the evenly matched natures of the creator and destroyer races and on the incredible power of the Ecto-115 element. Though the Ketir wanted an alternate power source to fall back on (primarily to quickly and efficiently destroy lesser, more boring threats), they were most interested in testing their mettle against these foes. They waited only a short while before sending several major battle groups into the sector. The groups know that they are largely on their own, as the majority of the Ketir-Iah have moved on toward the goal of ever expanding Kherita Neguom, and nothing could be more to their liking.

The Progress of the Ketir-Iah Invasion