From BrikWars
(Redirected from Tek)
Jump to navigation Jump to search 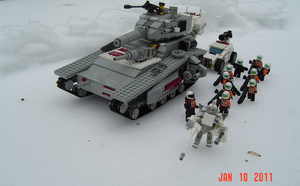 ASE Patrol in BR 2011 with a Super Tank, Hardsuit, and Armoured Car.

BrikWars embraces Teknology from every source and genre, from simple tools and objects to the most sophisticated science fiction epitek. Battlefields are just as likely to see short swords and shields as they are to see plasma rifles and power armor. Troops are as likely to take to those fields with chariots and siege engines as they are to come in tanks, battle choppers, or even starships. Teknology defines the technical means, the material objects (usually of warfare), that minifig societies construct, develop, and use to interact with their universe (usually in a violent manner).

In most cases, there are no real, appreciable differences between real world vehicles and their BrikVerse counterparts outside of the fact that one is made from plastic toy bricks. The same is essentially true of most fictional vehicles and machines: BrikWars counterparts are often modeled after genre tropes. The following table lists very basic vehicle and machine types, fictional and real. Some of the entries listed link to other pages. Where this is the case, most often the links are to galleries of BrikWarrior creations. However, as BrikWarriors continue to build and expand the BrikVerse canon, some of those pages might start to fill out a little more with BrikWars related fiction, images, or rules modifications. Vehicle and Machine pages that grow large and come to encompass groups of many types special to the BrikWars concept are pointed out especially, below.

Some vehicle or machine types are expansive, detailing many categories within a similar type. BrikWarriors are especially fond of the following types of these creations and have conceived of much lore surrounding their inclusion into the BrikVerse.

Space Vehicles and Machines are the bread and butter of some of the most prominent storylines in BrikWars canon.

Tanks are a favorite death-dealing mechanical terror on many battlefields.

Inspired Creations are the Awesome creations of Awesome BrikWarriors.

Individual weapons and equipment (swords, shields, guns, communication devices) are extremely common in the BrikVerse. More industry is focused on creating the tools of warfare than on increasing the standard of living for minifig civilization or supplementing the advance of scientfik knowledge. There are no real, appreciable differences between BrikWars weapons and equipment and their real world counterparts, again, other than the fact that one is a plastic toy. And again, the same is true for fictional counterparts based on commonly accessible tropes. Instead of creating an exhaustive list of all the possible weapons and equipment, this section identifies those special general and player specific types that have an effect on BrikWars canon. Unlike vehicles, weapons and equipment (being, at their most basic, generally pre-molded into a single piece) don't become interesting until they are brikbuilt into something more or have lore built up around them.

Artifax are the BrikVerse's most powerful items. They shatter rules and preconceptions with contemptuous ease and alter the course of history whenever they are employed.

The Nine Artifax of Pre-Creation

The Nine Artifax of Pre-Creation are the single most badass items ever and several primary BrikWars storylines, such as the Quest of Piltogg, revolve around them.

There are several other Artifax within the BrikVerse. Each is a massive power unto itself, less powerful than the Nine but far more powerful than any other item in existence. Artifax always have epic stories attached to them, from legendary origins to the great deeds of the heroes who wield them.

Heroic Items are extremely powerful weapons and equipment that, when put in the right hands, can accomplish great things in the universe. Heroic Items are less powerful, often by far, than Artifax but remain some of the most useful and potent creations available to characters. As a group, these items often have an interesting storyline which explains their power.

Beamsabers are chrono-frozen laserbeams attached to a hilt and are some of the most dangerous and difficult to wield melee weapons in the universe.

Fetters are items crafted from Ecto-115 that radiate ectoplasmic energy and help to tie spectral creatures to the corporeal realverse.

Nova Swords are concentrated star matter contained within an extremely powerful energy field generated by a specialized hilt. They are extraordinarily expensive and fine melee weapons.

Personal Teleporters are a rare teknology that have the ability to instantaneously translocate a single creature.

War Guitars are divine instruments of battle, gifted to worthy creatures by the Metal Gods.

Since weapons, equipment, and vehicles can be such a fundamental part of any given game of BrikWars, several ideas have sprung up concerning their use.

The BLACKlist is a conversation players have concerning allowed equipment in a game of BrikWars.

Epitek is epic level teknology that occurs in remarkably deep or large storylines and Wars.

ExperiMENTAL Teknology is revolutionary tek that hasn't been particularly well researched or field tested and is utilized with highly unpredictable results.

Tek Level is a numerical measure of a given faction or unit's general teknologikal capability.

Teknologikal Nomenklature is a description of how, in very general terms, teknology is named and classified in the BrikVerse.

The following are groups who deal extensively and particularly with teknology, whether buying, selling, trading, stealing, using, inventing, or manufacturing.