From BrikWars
(Redirected from Timestream)
Jump to navigation Jump to search

The Birth of the Deadly Spaceman

IN THE BEGINNING, the history of the BrikVerse was simple. Blocky brick-built figures rose up from the primordial plastic, which then evolved into simple minifigs. Led by the Yellow King, the fountainhead of all lines of royalty to follow, the civilization of these new minifigs flourished. They quickly mastered the art of hinged castle-building with the creation of the legendary Yellow Castle, and eliminated all non-Yellow figures in a friendly campaign of smiling racial genocides.

With the progress of history, this carefree population of medieval knights blossomed into modern cities of yellow and happy-faced citizens, brutally divided by hat style into strict castes of policemen, petroleum workers, drivers, firemen, construction workers, and finally, girls. The construction worker class developed a substantial body of knowledge surrounding the usage and properties of the mysterious ABS they worked with, and independent cabals of construction-worker theoreticians began investigating the possibility of using it for interdimensional space travel and bioengineering. Before long, all of minifig society was caught up in a space race to extend their reach to the plastic stars above.

While the first SpaceShips were under assembly in high-security police and fire stations, secret hospitals staffed by faceless and limbless proto-figs worked round the clock to design and create SpaceMen to pilot them.

It's impossible to know the sources of genetik material used in the injection-mold construction of these ultimate superfigs. It can be assumed that no yellow-colored species was left untapped, from the smiley-faced minifig citizens, to their limbless protofig servants, to the long-armed yellow giants of earlier ages. (Any suggestion that the bloated white-colored Dooploids were involved, however, risks attracting the interdimensional attention of any number of SpaceMan Planetary Sterilization Squads, and is best avoided.) There was no questioning the end result, first achieved by the prestigious research team at Hospital 555: the Deadly SpaceMan, the most dangerous bioengineered organism ever to exist, was loosed upon reality.

The tales of the Deadly SpaceMen's interdimensional wave of terror, the internecine wars between the Red and White SpaceMan factions, and the histories of their galactik conquests would fill a library. For our purposes, it's only important to note that when their thousand-year rampage reached its end, they had kicked the ass of the entire universe. As SpaceMen of both factions planted their flags on the burning husk of the final unconquered world, the accumulated eon's worth of conquest reached such a level of ass-kickingness that it would soon break the universe.

Eventually, SpaceMen created the ultimate dimensional weapon, the Orange Time Chainsaw. This terrifying device annihilated their enemies by pushing them out of space-time into the future or the past. However, it was too strong and the weapon soon ripped apart time itself and shredded the very fabric of the BrikVerse.

Broken shards of the shattered SpaceMan universe ripped forwards and backwards through time and across dimensions, disrupting and shredding the fabrik of the Brik timeline. While the overall sweep of history remained similar, holes torn by chunks of SpaceMan reality introduced new twists and complications.

The Yellow Castle remained pure and strong in the new reality, but now the countryside was overrun with the terrifying anthrofigs of Furbuland. As civilization reached the modern age, the strict class order of society was frayed at the edges: some minifigs wore policeman hats and yet drove cars, while others wore never-before-seen chefs' hats and became chefs. Others still bucked the hat-based order entirely, wearing no hats at all like common girl minifigs, despite being male.

Regardless of these changes, history followed the same overall course. The SpaceMen rose up once again, this time in warships of even greater sophistication and variety, and broke the universe even more efficiently than before.

Shards of the second universe ripped forwards and backwards through time, along with extra shards left over from the first universe; these disrupted and shredded the new Brik history even further. A new, third history developed, similar to the first two but distorted by their interference. When the third was shattered, there was a fourth, and then a fifth, and so on. With each catastrophe, the reformulated universe became more sophisticated and complex, with the influx of minifigs and constructions of all the realities that had gone before. Animals and plants appeared in greater variety, the pure Royal bloodline split into endless factions, and the original citizen castes multiplied into an unintelligible multitude of minifigs. The great Yellow Castle was lost to obscurity, and even the mighty SpaceMen were altered and diluted by the effects of one broken universe after another, first splitting into more and more faction colors, then into different varieties of SpaceMen within those colors, and finally into endlessly specialized space warriors far removed from their SpaceMan forefathers.

Because the use of ABS as a construction material and fuel has the side-effect of warping time and space, and because SpaceMen's natural compulsion to kick ass must inevitably tear all histories into tangled messes, time in the BrikWars universe is inconsistent and poorly-defined. One might leave one's house in the morning on a brisk walk, innocuously chewing a piece of ABS chewing gum, and find oneself arriving home over nine thousand years in the past. Two sides of the same street might be on separate planets one day, and cross-dimensionally superimposed on one another the next. How does one organize a history when such extreme distortions are possible?

BrikVerse historians order their scriptures according to Rekonstruktions, assigned a number according to how many previous realities they're influenced by. These numbers are prefaced with the convention "BR" (for BrikVerse Rekonstruktion), but some of the older inhabitants of the BrikVerse, the ones who haven't been recycled yet, prefer the more ancient "G.R." convention (for Great Rekonstruktion). Both are equally correct ways for historians to refer to time as each group thinks theirs sounds the coolest.

Although the reality in which SpaceMen arose has been proven to be the original version of the BrikVerse, Brik science has determined that the SpaceMen's destruction of the universe retroactively created 1,977 previous generations of retroactively-constructed realities preceding their own, designated as Retkonstruktions (or Retkons for short). None of these previous realities contain minifigs, but as they get closer to R. 1,978, devolved forms of pre-minifig life can be observed. These creatures occasionally reappear in later Revolutions, and may paradoxically be the source of the protofig bioengineers responsible for creating the SpaceMen in the first place.

Brik theologians theorize that, because the Universal Ass-Kicking created 1,977 previous generations of reality, it must have created exactly 1,977 generations to follow, and the BrikVerse will finally run out of ABS in BR 3,955.

By complete and lucky koincidence, Rekonstruktion numbers correspond precisely to the years on Earth during which their factions appeared on retail shelves in construction brik sets. For instance, the invasion of Poop Dragons from the NegaVerse occurring in BR 2,003 happens to correspond exactly with Mega Bloks' "Dragons" line knocking LEGO out of the #1 Construction Toy spot in the year 2003 on Earth.

Naturally, factions don't simply disappear at the end of their Rekonstruktion; remnants of each faction linger on in the garage sales and discount shelves of history. A popular few, such as the Royals, come back for several Rekonstruktions in a series of evolved forms.

A Breakdown of Time

The BrikVerse came into existence with the appearance of the Deadly SpaceMan. The Deadly SpaceMan’s unprecedented awesomeness created a force of Kanon which expanded forwards and backwards in time, creating both a past series of events leading up to his appearance and a future set of events resulting from it.

In the course of everyday BrikVersal events, one event leads to another in sequence, in a manner familiar to Humans. However, as shown by the arrival of the Deadly SpaceMan, events that are particularly notable can gain the power of Kanon and force changes to events elsewhere on the timeline for the sake of Internal Konsistency. Changes to past events are called Retkons and occur by a process of Inverse Kausality.

The Deadly SpaceMan was awesome to begin with, and as the Deadly SpaceMen multiplied their power and coolness escalated exponentially. The unstoppable killers organized into warring DSM Empires that conquered the entire BrikVerse. The DSM Wars accelerated the generation and magnitude of Kanon so quickly that new events were Retkonning themselves faster than they could even occur in the first place, finally culminating in a recursive cascade collapse singularity. The entire BrikVerse timeline and everything in it exploded outward in an explosive Kanon ball.

Just as the DSM's arrival caused the creation of both past and future reality, the destruction of the BrikVerse created both preceding and subsequent generations of BrikVerses.

Incomplete and scattered chunks of the original BrikVerse's history and reality, known as Particle Kanons, acted as seeds for a new and Rekonstructed BrikVerse. Events and characters from the original BrikVerse Kanon reappeared in the new timeline, but not always in the correct order or locations, and the empty sections of history filled themselves in as best they could along slightly different lines than the original version.

Meanwhile, reverse-polarity AntiParticle Kanons traveled in the opposite direction, creating an earlier version of the BrikVerse to precede the original one. This Retkonstructed BrikVerse included no minifigs, only collections of strange, regressive creatures who seemed to only come into existence as potential ancestors to the minifig-kind of later BrikVerses.

Naturally, some Particle Kanons carried Deadly SpaceMen along with them, and the introduction of Deadly SpaceMen into the new BrikVerses had the same result as in the original: their influence caused escalating Kanon events until Infinite Kanon was breached and the new BrikVerses exploded as well, sending chunks of themselves forward and backward into Rekonstructed and Retkonstructed versions of their own, and even paradoxically re-seeding each other and the original BrikVerse from which they'd been spawned. 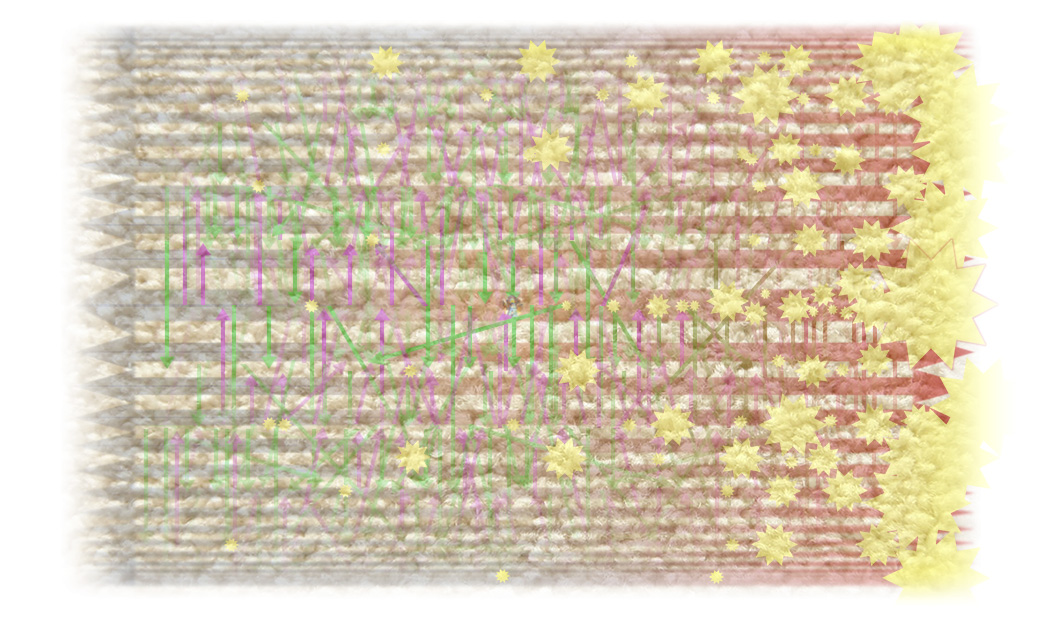 The kompounding influence of infinite Particle Kanons from each timeline influencing all other timelines results in infinite interconnecting versions of each discrete timeline, woven together in the cross-dimensional multiversal warp that makes up the fabrik of reality.

So there you have it! Easy enough for a minifig to understand!