Four Horsemen of the Brikpocalypse

The quiet truth is that each new Anorak that enters the universe revives and reinvigorates them and allows them to continue gathering power and influence. A few theologians posit that the sounds of battle coming from within the Ice Fields aren't really a Final Battle of any kind but, rather, the echoes of all the Battles in the BrikVerse ever fought contained in a final, deathly cold resting place where they will eventually fade to nothing - not with a bang, but with an infinite, BrikVerse-spanning whimper. 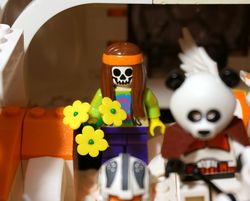 Peace is the first and most terrifying of the Horsemen, sapping minifigs' will to fight, live, or exist, through the corrupting afflictions of Friendship, Forgiveness, and Harmony.

The current Horseman of Peace is Pacifass, an alternate-dimension psychotherapist mirror Nega-version of Warhead. In response, countless splinters of Warhead have broken off and scattered to oppose and eliminate Peace throughout time and space and across Rekonstruktions.

Notable allies of Peace include the Pwnies and the pre-reformation Allied Nations. 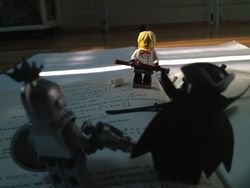 In a confrontation between quantumsurfers, Colette takes Silvadream and Overwatch Elite to a dimension of math and righteousness

Justice, or Righteousness, is the most hated of the Brikpocalyptic forces, as its evil power often seduces and corrupts even the greatest Brikwarriors. The crimes of Justice are too many to list. Its offenses include Rules Lawyering, Correct Spelling, Civilized Behavior, Forum Arguments, and Fun Policing. It can be difficult to battle effectively against an opponent who is lost to the compulsion of Being Right, until one opens their mind to the Farce and discovers the indispensable value of wrongness.

The current Horseman of Righteousness is the ever-changing Anorak, whose spirit jumps from victim to victim like a virus, possessing even his greatest enemies and making them act like complete tools until the power of Fudge is able to nullify his influence.

Notable agents of Righteousness include the quantumsurfer Colette. 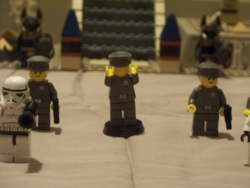 Stability attempts to prevent the Kanon Ball from dropping and ushering in BrikVersal Rekonstruktion 2,015

Stability is a deadly Kanon-killing force of stagnation, opposing any form of customization or change. Safety, Consistency, and Complacency are among its evil powers of stagnation. Stability uses its powers of Stasis and Gatekeeping to hold on to a Brikverse in which a status quo is preserved for all time, preventing any Rekonstruktion or Kanon evolution.

The current and eternal Horseman of Stability is a faceless, identity-less minifig named Stability.

Stability rarely acts directly and has no notable allies, but its power is thought to have considerable influence over the unkillable Immortals and the timeless, ensanitizing god BrikThulhu. While infinitely less disgusting than Peace, Justice, and Stability, Poop is still pretty shitty. Poop is the anti-quality that degrades all crappy things, from CLOan Brand figures to Forum shitposts to POOP construction elements. Poop seeks to reduce the Brikverse to a generic, knockoff Poopverse in which all quality and skill are snuffed out.

The current Horsewoman of Poop is the Nega-BlokTrix, whose steed is a Negaverse POOP Dragon. Her enemy is the Deadly Spaceman.

Poop has many monstrous and corrupted adherents, including all CLOan Brands, Dimmies, Dungans, and shitgoats. The taint of Poop is much more easily identified and targeted for destruction than the influence of the other three Horsemen, and even the least militant minifigs are inspired to take up arms to destroy it wherever it is found.