Space Austria is a peach-centric Archduchy with a sizable infantry and mechanized force, conceived in late BR 2,015, the Space Austrians became a part of the forum in mid-BR 2,017. They have been involved in several battles, including much of the the Magikalennic War

The Empire of Space Austria is broken up into 5 sectors, or "Star districts" as they are better known,they are as follows:

Sector 1: This area is known for its sumptuous wealth and power, it is the home of Vienna II, which serves as the primary shipyard for the SA's navy, as well as the planet known as Vienna I, the location of which is left undisclosed. Visitors describe Vienna I as a place of immense beauty, with great highways connecting compact cities of skyscrapers and endless seas of grass. Vienna I serves as the head of the SA's government, and the location of many of its greatest minds, as well as being a sanctuary for high ranking political refugees. Vienna I also serves as the location of the SA's R&D headquarters. Vienna I is home to around 100 million minifigs, nearly all of them employees of the state, and although only around 5% of the planet's surface is populated, 97% of the people there live in the densely populated cities. Sector 1 also serves as the Empire's financial hub, however all of the large businesses in sector 1, including the rapidly growing South Roman Financial institution are enterprises of the state. Privately run businesses however, are found in the poorer sectors.

Sector 2: Sector 2 serves as the center of the SA military, including the Capitol and home of the Imperial palace. (Sprawling residence of the imperial couple); Orchard. Sector 2 is also home to the planet Vienna III, which is one of the more exposed planets in the SA domain, having near Autonomy in the region, Vienna III has its own military and parliament, however it is still very much a part of the SA's Empire. Sector 2 is the most sparsely populated Sector in the empire.

Sector 3: The most populous sector in the empire, also home to the largest number of Non-peach citizens. Sector 3 is also the location of High Fort, one of two military bastions, in which survivors of a cataclysmic event could seek shelter, both forts have enough resources and a large enough garrison to withstand a constant assault from a Tek 6 or lower civilization almost indefinitely, they are considered impregnable to anything but black hole missiles. Sector 3 is also the location of plane StraussBurg, a massive city planet, which has seen decades of cultural mixing, as it is heavily populated by immigrants from the USSSR, whose culture can be prominently seen there.

Sector 4: Often referred 2 as the "Crisis Sector" Sector 4 has primarily become a sanctuary for peach immigrants seeking a safe haven from oppression elsewhere in the Galaxy. The government is currently trying to increase its presence in sector 4, however current Burgomaster Stephen Katz argues that the flow of immigrants should be stopped. Although Katz has support from many of the predominantly Yellow systems, he has found little favor in the upper levels of government.

Sector 5: sector 5 is the most heavily militarized sector of the Empire, as there is a constant fear of Galacian or Soviet attack. Nearly every planet there has some form of military outpost or garrison. Although nearly all citizens of the Empire live a fairly standard Upper middle class lifestyle, with advanced Tek and medicine, poverty is most Acutely felt in Sector 5, ans much of the infrastructure, often left over from Soviet occupation is damaged or in disrepair, and the Government's welfare, which provides the primary source of income for non government personnel* has been less effective there. The current establishment looks to improve conditions in Sector 5, however, until the Galacian threat is culled, that is unlikely to change. Sector 5 is also the home of the other Military Bastion, Low Fort, which serves as a sister to High fort, as well as a refuge in the event of an attack from the Galacians or Soviet powers.

No one knows when or why the Deadly Spacemen showed up; they just appeared one day. There had been almost no life in that area beforehand, but that all changed when the Spacemen brought the seed of destruction to these empty worlds.

The spacemen ruled for many eons, but the cracks inevitably began to show through. With the fall of the original spacemen, the now unoccupied and chaotic territory was claimed by "rising" Phoenix Hapsbrik, conqueror of a million worlds, and the first in the infamous Hapsbrik line.

Phoenix disappeared one day, leaving his kingdom to be split among his kin, and eventually forming many countries, among them, the Archduchy of Space Austria. (Many believe that Phoenix still lives, and shall someday return at the "coming of the third siege.")

The Space Austrians steadily grew in power, claiming much territory (most of which is now in Soviet hands), and formed the Paladin guards, a standing army to defend their lands. They later joined the Holy Briks league, and served dutifully along with the (future) Unified Republik Poland, Hungarians, Holy Romans, and others. Perhaps their most notable victories during this time were their involvements in the war of Austrian Successes, as well as their two victories over the AUTO-man droid Turks, in the sieges of planet Vienna ( in which they were heavily aided by the Polish.)

Following the second siege, Space Austria formed a union with the Hungarians, forming the empire of Space Austria Hungary. The joint empire controlled a vast portion of the galaxy, but these good times were not to last. When Archduke Franz Ferdibrik was shot and killed, the empire declared war on the space-Serbs, leading to war with the future USSSR. And although the Austria-Hungarians experienced initial successes, they were eventually defeated and forced to surrender most of their territory. Unable to maintain a large army, the Space Austrians were nearly ruined, but then, fate played its cruel hand.

The weak Archduke Bob, having no other choice, surrendered all of his resources to the Intergakactik Fascist Alliance (many Bavarian troopers that took part in the AN-TA War were Space Austrians). But worse yet, with tek supplied by the Immortals, thousands of Peaches were rounded up for slaughter.

With the ending of the war, the Space Austrian Reich was pushed back to the planet of Old Vienna, and its one moon, Orchard.

Orchard was the "holding cell" for around 50 million Austrian Peaches, and all semblance of government fell apart on Old Vienna during the Communi-Fascist insurgence. At its lowest low, radical change began.

Ato Hapsbrik, rightful heir to Space Austria, lived a politically active life on Orchard. His family had been excluded from politics ever since they had bred with peach minifigures, but Ato's claim to the throne was still far more significant than anyone else's. Ato began going from town to town, preaching revolt, and the creation of a new, and fair state. Ato was aided by a resentful Assyrian Peach named Von Ernst, who aided him in organizing the Burghers, an all-peach official military force.

When guards cane from Old Vienna on transport ships, the burghers seized them. Ship after ship was sent to arrest the insurgents, only to be captured. One day, the Burghers attacked Old Vienna with all of the captured transports they had. The planet put up little resistance, and Ato ascended to the throne.

Ato set right to work reforming the government. He returned the Reich to its Archduchial state, and imposed a parliamentary system, supported by a loyal populace and a powerful intergalactik army. Ato then began to reclaim the land he once lost. He took a wife (who is probably a much better leader than he is) and began invading system after system, returning the Empire back to a healthy 3,000 or so worlds spread around about 300 systems. Once he was sure that he had enough power to make himself visible, Ato requested an alliance with the RC, which was highly successful.

In more recent events, the space Austrians fought several battles over an ancient superweapon, and attempted to destroy the galaxy's financial heart. Though the attempt was thwarted, the Space Austrians showed that they meant business. (The possibility of war between the SA and the Trattorians is still high, but lack of available forces on both sides may lead to the conflict quieting.)

Following this, the Space Austrians pursued friendship with the Darkstorm Empire, which gives them the opportunity to improve trade, as well as study the dark forces and their power.

The Space Austrians have been involved in several other conflicts, and continue their dominance as a powerful empire, and a force to be reckoned with.

As of late the Space Austrians have continued to play a forward role in politiks.

Space Austrian Capitol ship, alongside High Vienna The Immense firepower of these massive vessels can clearly be seen. 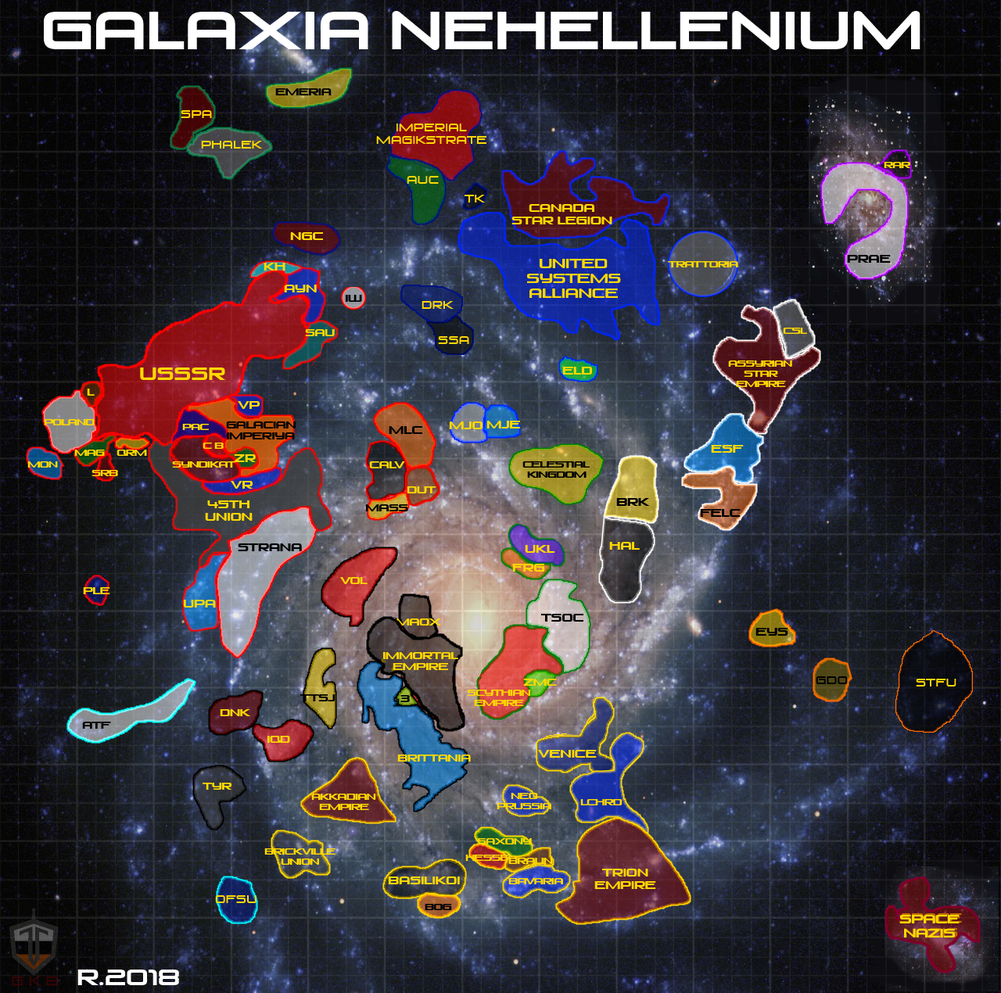 Space Austria is Located in the Western Arms, near the USSSR, it is labeled SAU

AND A ROCKET TO LAUNCH IT ON

This battle was a Great Victory for the Space Austrians, as they managed to place a solid attack against interior planets.

Fought in the campaign to claim the rocket, they suffered heavy casualties, but were ultimately victorious.

Also faught in the afformentioned campaign

The units responsible for 1st contact with the DRK. They faught in the battle of close quarters

Defender the walls of Vienna III and the Hapsbrik Eagle

Rigged up battery canisters full of the Peach Virus to a doomed generator, during Operation Schadenfreude in the hopes of spreading the infection.