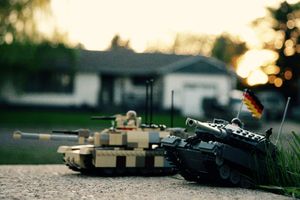 UK Champion 2 and DE Leopard 2A6 during exercise Dominian

Tanks are, without question, one of the most reliable vehicles that minifigs can call upon when carnage is the rule of the day, which is, of course, every day. Tanks are seen throughout many Rekonstruktions as a recycled teknology. Nothing is ever the same from Rekon to Rekon, however, and tanks are no exception. Due to their celebrated ability to capture the imaginations of minifigs everywhere and bring unadulterated joy to their little plastik hearts, thousands and thousands of designs have circulated through fluctuating Factions and Forces in every version of the universe. Even non-minifigs acknowledge their unrivaled awesomeness and badassery on the field of battle and several knock-off designs have surfaced as well.

The most common types of tanks in the BrikVerse belong to the family of designs, or the Class, called Battle Tank. As with anything in the BrikVerse, though, the level of customization does not stop there. The many Rekonstruktions, with all their varied Tek Levels, shifting circumstances, and ever-changing Battlescapes, have brought forth many other Classes of tank design and construction. It may therefore be best to define a tank in the BrikVerse as any armored heavy vehicle with powerful offensive capabilities; a war machine, primarily employed to dominate and control ground level engagements.

Infantry Fighting Vehicles (commonly referred to as IFV's) combine the combat capabilities of a light tank and the troop capacity of an APC.

Light tanks are relatively lightweight, being constructed without the heavier armour and weaponry found on other Battle Tanks, and tend toward skeletal systems and crew designs. These tanks are built to be highly agile, highly mobile weapons platforms or reconnaissance vehicles. Because of their lack of armour, they tend to be called 'light tanks' instead of 'light battle tanks', simply because they aren't meant to be in the thick of battle.

Medium battle tanks follow a conventional, versatile design philosophy and embrace a balanced trifecta of mobility, offensive capability, and defensive capability. These tanks are the most commonly fielded support vehicles and usually appear in platoons.

A cross between artillery and the light tank, Self-Propelled Guns(or SPG's) are typically large guns or howitzers mounted on an armoured, self-propelled frame. Their main purpose is to aid infantry forces attacking fortifications or enemy infantry.

Main battle tanks are the lead tanks in many armies. They are the lynchpins around which revolve the most successful strategems. MBT's are typically slower than their light tank counterparts but maintain a higher survivability ratio (through their heavier armour plating) and a greater offensive capability (through versatility or higher grade of weaponry).

Heavy battle tanks are the big guns on a battlefield, having virtually sacrificed mobility for sheer damn firepower and ridiculous amounts of armour to protect it.

Hover Tanks are armored, self-propelled combat vehicles, armed with a variety of specialized weaponry and usually moving via some form of hover or flight teknology. While not always the most powerful of tanks, hover tanks are easily the most versatile. They are capable of ignoring most terrain difficulties and deploying in an extreme range of environments. Due to this vast utility, hover tanks are often equipped with unconventional weaponry and systems to enhance their tactical superiority. There are a handful of general specifications of this Tank Class.

Glider hover tanks go virtually without armour or any other heavyweight components. Particularly advanced gliders might still employ force fields or lightweight materials in terms of defensive capability but the primary focus of a glider is speed and maneuverability. Gliders are used to get highly specialized weaponry into position as quickly as possible during a combat engagement.

Cruiser hover tanks embrace a balanced design between flight capability and the weight considerations of heavy firepower and armor. Advanced cruisers almost always forsake armour in favor of force fields to minimize strain on the hover engines and maximize the capability for destructive power. This is the most common type of hover tank.

A floater hover tank is a heavily armed and armoured vehicle which utilizes either massive amounts of hover-type engines or highly advanced flight teknologies to keep the flying fortress mobile.

Rolling Tanks are large, armoured, self-propelled combat vehicles, armed with a varied array of weaponry and usually moving on wheels. These tanks are deployed in environments where terrain is not a significant consideration, such as a Battlescape dominated by roads or fields. There are many specifications of this Tank Class, ranging from medieval, magik-fuelled, battlewagons, to steam-powered armored carts, to diesel guzzling, heavily modified big rigs.

Walker Tanks are very large, armoured, self-propelled combat vehicles, armed with heavy combat weaponry and ordnance and usually moving on mounted, mechanized legs. Walkers are highly mobile, capable of traversing a huge range of Battlescapes, but retain sturdiness and stability throughout most designs. There are a small group of design specifications in this Tank Class.

Support Walkers are not expected to go head to head against other armoured vehicles--Rather, they fill support roles such as scouting, infantry support, artillery, and transport.

Biped walker tanks are usually massive tank bodies mounted on two mechanized legs. Biped walkers are typically the smallest found within the Class, sacrificing the advantages of a more heavily armed and armoured frame for maneuverability on dense battlefields.

Spider walker tanks are walkers with three or more mechanized legs, appearing most commonly in quadrupedal form. This is the most general sort of walker tank and combines the advantage of easy mobility with the advantages of high output weaponry and solid armouring.

Where Tank Classes define groupings of design specifications, Tank Designations help to further define and classify individual vehicles. These categorizations can be applied to any Class or Specification, allowing for Super Heavy Death Hover Tanks or Apocalypse Spider Tanks, for instance.

Super Death Tanks, or SDTs, are the most potent singular engagement combat vehicles in the BrikVerse. Armed with a staggering array of weaponry, from light automatics all the way up to the most massive earthshaking ordnance, and armoured with plating the likes of which many starships never see, SDTs are the premiere death dealers on any battlefield they grace.

While SDTs like the Assyrian Vanquisher or Trattorian SDT, some wish for more weaponry or manuverability, and so new types of tanks were created, like the Super Heavy Death Tank (SHeDT), of which the Briktopian Vindicator is a great example, the Super Hover Death Tank (SHoDT) such as the AN Tigershark. But even that didn't satisfy some and so they made the mightiest of SDT to cause mayhem and chaos across battlefields: the Super Heavy Hover Death Tank (SHe/HoDT). Sadly, the only example of this type of tank is only represented by the Prometheus MKIII.

Apocalypse Tanks are the largest category of tank known to minifigkind. They are disturbingly well armoured (to the degree of actual defensive installations) mobile headquarters capable of supporting planetary scale tactical operations. These vehicles are equipped with the biggest, baddest, ultra long range ordnance batteries (even including ground-to-air and ground-to-space batteries) and regional shield generators capable of withstanding even orbital bombardment (on a large enough scale, even from capital ships). On the ground, Apocalypse Tanks are the most massive, meanest, most capable platforms of destruction BrikWars has to offer.