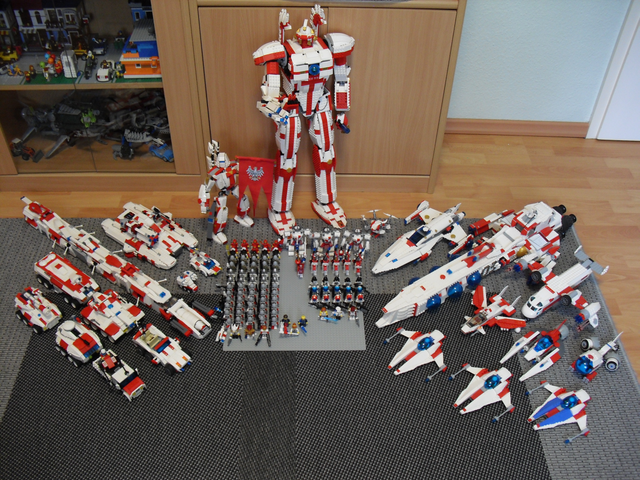 The Polish Army in it's whole glory

The Zjednoczona Rzeczpospolita Polska (also known as the Unified Republik of Poland or URP among abroad nations) is a nation, which eventually grew stronger after an Communist occupation, both in economy and military. Despite being raided countless times by nations like the USSSR and Bavaria, the Poles managed to keep fighting and therefore never vanished entirely from the Nehellenium Galaxy. 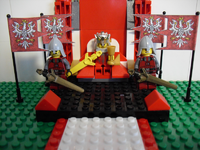 The Polish King Władysław II Jagiełło sitting on his throne

The Kingdom of Poland was founded centuries ago by King Mieszko I and remained relatively stable for centuries. However, under Władysław II Jagiełło the Kingdom thrived in prosperity and political stability and was recognized as one of the most reputable empires in the Nehellenium Galaxy. At a certain time, the Jagiełło dynasty died out and with it the Golden Age. However, even afterwards, kings like Jan Sobieski proved the strength and determination of the Kingdom of Poland in the eyes of the whole galaxy, by crushing the Ottoman hordes in the battle of Vienna with one of the biggest cavalry charges in history.

But on the other hand, the political situation in the Kingdom deteriorated from time to time and the people was exhausted from the many wars it fought, leaving it prone to it's blood thirsty and greedy neighbours, that lusted for Polish territory (among them, the USSSR, the Space Nazis and the Prussian state). Not even the greatest army could have resisted the vast hordes of intruders, that even were fighting each other off for the supremacy over Polish land. In the end, this bloody conquest was won by the USSSR, which quickly began to install a communist puppet government and to liquidate the whole Polish elite, including intellectuals, clerics and politicians. Many of them were forces to seek refuge in other nations, some of them offering their services to them. Unfortunately no foreign nation was ever interested in the restoration of a Polish state, leaving the Poles in their USSSR-occupied homeland in a hopeless situation 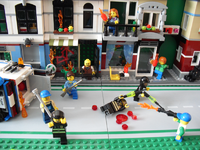 Scene of Warszawa during the Uprising

BR 2,014, however marked a turning point in the fight for freedom, as a vast uprising erupted in the Polish Capital Warszawa. While most of the urban and historical old city districts have been destroyed in the process, the uprising was a great success in the fight against the Bolshevik hordes. In the following days, the uprising spread across the Northern regions of Poland and many politicians collaborating with the Russian invaders have been removed from office and sentenced to prison.

Plans were forged to established a new federated republic inside Polish territory, but the provisional government in Kraków strongly disagreed to that idea, as they pleaded for a provisional military autocracy, until a legal heir to the Polish throne has been found. Thus, the Krakow Union has been formed and managed to form a union with a formidable army on it's own. The other half became known as the Konfederacja Wielkopolska, with it's government located in Nowa Warszawa.

After the formation of the Konfederacja, the Poles sided with the AN Forces in the AN-TA War, in the hope to weaken or even destroy the Third Alliance, once and for all. Although the war ended in a stalemate, the Konfederacja still could present it's military strength to the eyes of the galaxy, eventually rising to an intergalactic superpower. However, Prezydent Sadow knew, that the independence of both Polish states, would be a thorn in the eyes of the USSSR and the Space Nazis. Thus, the Intermarium Coalition has been initiated, to fight Communist and Nazist forces throughout the galaxy.

The idea of such an alliance caught the attention of the Krakow Union, quickly, whose government proposed on joining the Intermarium Coalition. This event gave the opportunity for both Polish states to come close and thus the Treaty of Poznań was signed in May of BR 2,015. This treaty would guarantee a smoother cooperation between both states, by loosening border controls and recognizing each other as sovereign representatives of the Polish people.

In July of BR 2,015, the Space Nazis began with the invasion of the Konfederacja by striking on three key locations: Nowy Gdańsk, Poznań and Puczysk. While the intruders have been driven out quickly, they managed to summon the daemon Beelzebub, that destroyed the Planet Puczysk, killing 4 Billion Poles in the process. The daemon has been killed by Chief Librarian Jerzy Durer at the same day, but the events will be remembered as the Massacre of Puczysk (pl. Rzeź Puczyska) by the Polish population.

In early BR 2,016, the Poles helped the Magyars to successfully defend their homeland from Soviet invaders. As the Coalition was busy with defending it's home worlds, the Lietuvans stroke at the Byelorussian SSSR. Since the Greater Empire of Lietuva wasn't attacking any Polish worlds or units, a Polish intervention against them in that conflict was impossible as it would depict them as imperialists, oppressing smaller nations. It wasn't until a Lietuvan Captain forced his crew to shoot at an unarmed Polish freighter passing the border, that the Poles started to mobilize troops and waged an attack on Byelorussia.

During that campaign the Poles learned through the Soviet deserter Nikita Kosygin that the Soviets were developing a new viral bio-weapon with the capability of eradicating an entire planet's life within hours. Thus a strike team lead by Komodor Pierunska was send to Planet Hrodna to locate the samples of that agent. Albeit being intercepted by Lietuvan forces, the Poles managed to snag a sample with the aid of troops from the Imperial Magikstrate. In October BR 2,016, the Kraków Union and the Polish Confederation finally reunited into the Unified Republik of Poland to conceive a mighty bulwark against the red hordes. 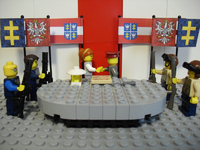 The Treaty of Poznań was signed, in order to resolve Trans-Polish issues and to solidify relations between both states.

The Polish foreign policy aims for maintaining good relations with most Greater Powers in the BrikVerse, but also wants to present itself as a strong and powerful nation, that does not have to rely on foreign help. However, the Poles have a rather humble approach on foreign relations, which means that they never try to claim to be the greatest or strongest nation in the galaxy (in spite of her own huge military). At the same time, they tend to frown upon any of these arrogant and atrocious claims of ultimate superiority from other nations. There are also some further specific relations with foreign powers, that are worthy to mention: 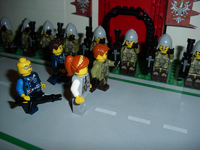 The Armed Forces are composed of the majority of ground forces and are tasked to either attack hostile worlds or defend own planets. After reclaiming sovereignty, the Poles heavily modernized their military by themselves, without any kind of foreign funding, in order to keep up with other greater powers, dropping most pre-dark age equipment in the process. Today, the Polish Military offers a wide variety of ground forces, ranging from well trained infantry regiments to vast tank divisions. However, the Husaria, the Polish elite cavalry force, remained to be an important and unique part of the Army, considering the fact, that the Husary ride on horseback, instead of using hoverbikes like other space civilizations. 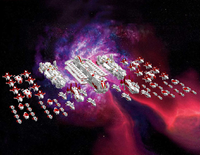 The Star Fleet has also received a remarkable modernization, so it can keep up to any other navy in the Galaxy. Most ships in the Polish navy are well known for their high durability, compared to foreign spaceships. On top of that, the Polish Star Fleet does also provide some specialized ground forces, like jetpack troopers, boarding parties and commandos.

Being responsible for most scientific matters, the Polish Institute of Natural Sciences or PINS is a very large research institute with many branches in different universities across the Konfederacja. As the name suggests, it was specifically created to research in vast areas of natral sciences, including biology, chemistry, physics and astronomy, but also to compete with other bigger research institutes in the Galaxia Nehellenium. This institute also contributed in research more advanced weapons and armor platings found on common Polish equipment, but also cooperates with the Forgefathers of Dobrzyń, when developing new machines of war.